If you need a reminder of where you’re at on the food chain, try attending a fancy award show like I did for work last week.  Here’s a little tutorial in being somebody vs. anybody…

If you’re somebody, you get dropped off at the red carpet in a tricked out Chevrolet sponsored event car.

Lady Antebellum, being chauffeured to the red carpet entrance.

If you’re anybody else, you get to park two miles away, fending off a Chatty Cathy parking attendant (who also happens to be from Iowa and wants to talk your face off about it) and make your grand entrance on foot.

Finally making it to the red carpet – what did I miss?

If you’re somebody, you wait for the photographers to shout your name before appearing on the carpet. 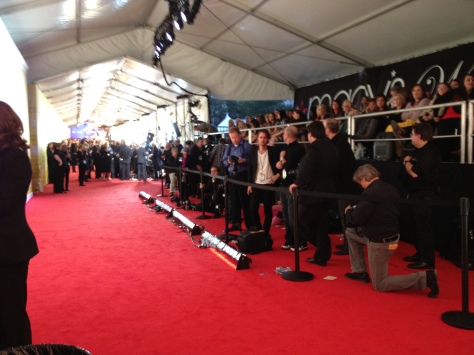 Begging for the celebs. 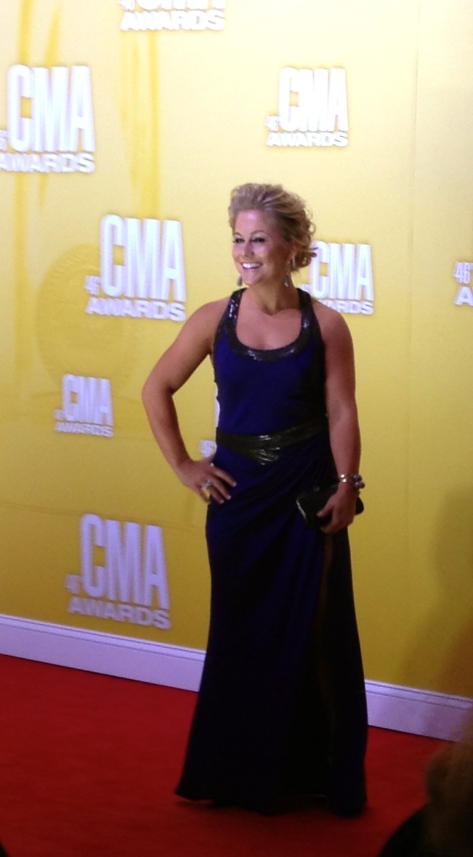 Shawn Johnson, the retired Olympic gold medalist and Dancing With the Stars alum being cat called from the peanut gallery.

If you’re anybody else, you hide in this hallway while the star you’re accompanying soaks up the flash bulbs. 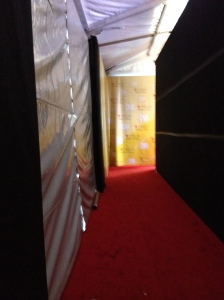 Where the star wranglers hunker down during red carpet photo moments. This hallway is directly behind the “stand and pose” photo wall.

Being somebody, you don’t need any announcement when you appear on the red carpet. Photographers and fans just know you and shout your name accordingly.

Lisa Marie Presley (yes, that Presley) needs no introductions (and yes, I was dying as I was snapping this photo).

When you’re anybody, your name appears in marker on a clipboard that is held up for the photographers just before you turn the corner to be photographed, ensuring people know who the hell you are.

Courtesy applause for the anybodies, please.

When you’re somebody and you’ve recently got caught stepping out on your wife, you go to the awards show with her anyway.

If you’re anybody else and everyone knows you’re a cheat, you stay at home and watch the awards from your couch in your pajama pants you haven’t taken off for three days, a stale beer and yesterday’s pizza, feeling very remorseful.

When you’re somebody, you know you look good and work it all the way up and down the red carpet.

Shawn Johnson showcasing her guns (much admired by me) in a racer back gown.

Jake Owen pranced around in a leopard blazer that I wanted to rip off his shoulders and keep all to myself (therefore giving him a complex that I was stalking him because I literally took 12 pictures of him down the carpet due to his jacket).

When you’re anybody else, you blog about the perils of what to wear to work the award show.

Does this vest make me look like somebody or just anybody?!

When you’re somebody, you get interviewed live by TV stations.

Tim Allen being interviewed by Evan Farmer of CMT.

When you’re anybody else, you crouch down in the corner ninja-style, trying to stay out of the camera’s shot or you’ll be kicked off the carpet. The horror.

If you’re somebody, you have no problems finding a plus one to be your date.

When you’re anybody else, you have to hang with all of the other people who are working the show.

Workin’ it with men in uniform. Poor me.

When you’re somebody, you perform on the massive stage.

When you’re anybody else, you’re perfectly fine asking a stranger to take your picture in front of it.

Anybody want to take my picture?

When you’re somebody, your entourage follows you up on stage to get you gussied up before the live performance.

Hair, make up and wardrobe folks putting the final touches on Carrie Underwood before her performance.

If you’re anybody else,  you have to take pictures back stage to remember where the bathroom is located, so you can brush your hair and reapply lipstick.

Which way to the ladies?

When you’re somebody, you blow the roof off the joint, then head out to the after party.

Aided by the foggiest fog machine ever and blasting confetti, you would have thought it was New Year’s Eve during Carrie Underwood’s performance.

When you’re just anybody, you get to go and walk the empty red carpet before tearing it down.

And then pose just like anybody else while no one calls your name. 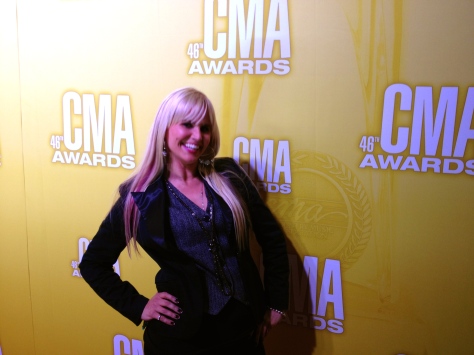 Anybody gonna holla at me? Anybody?

It’s rough trying to be anybody! Wish somebody would have told me.

26 thoughts on “How to Be Somebody”