Hosting and toasting a bride-to-be last weekend proved to lean a little more to the white trashy (dare I say redneck?  I mean, I do live in the South), less-than-classy side as the evening progressed…I know you’re shocked.

It all started with my genius idea to use my side sink as an ice chest. Except it turned my actual sink into the bar.

And then, a few drinks later my photo bombing expertise was challenged by amateurs.

Which led to the skull shot glasses coming out of the closet for all those involved trying to dethrone me of my one true talent.

No more photo bombing for you!

Suggesting the bride do a shot of her favorite tequila before opening gifts resulted in this face….

She loves tequila if you can’t tell.

Mr. Bear could hardly wait to help open presents.  His participation as a party side-kick really set the tone for fanciness.

Oh something crinkly? I got this.

TB was such a fab host that he guarded the door to the room where all of the purses were stashed. As my friend Tina (who loathes cats more than anyone else on the planet would not get any closer to him than pictured) tried to enter the room, Teddy challengingly stared her down (such an attack cat).  Straight out of a John Wayne Western film.

Did a tumble weed just roll by?

We celebrated our relief of the completion of Pursegate by taking a picture every time we took a sip of anything (even water).

Memory making with vodka. For the 56th time.

Oh, someone just had a gulp of beer? That calls for jazz hands, naturally. 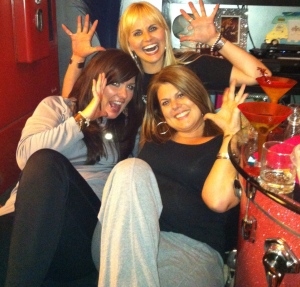 Oh and speaking of dairy, how many cheese balls can one get in their mouth?

After a party foul, the remainder of cheese balls ended up on my floor, where I was happy to leave them until the next day. Not for my pal, Ms. Clean.  I came out of the kitchen to find her whistling while she worked at 2am (then I pointed out all of the spots she missed, so I didn’t have to complete the chore myself).

My neighbors were loving me.

Who would have thought Johnny Cash would be the calm one of this bunch, as a leaning tray of shots was delivered?

Johnny is straight…tray of shots, not so much. 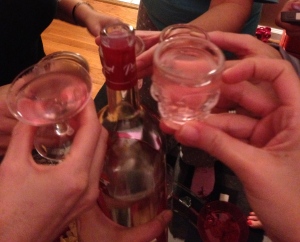 Our 132nd toast of the evening.

We went from kinda classless to straight up white trash after we moved the food into the living room (so that it would be easier to accompany each drink of liquor with a corn chip dipped in whatever was closest).

The first one to pass out ended up getting a Hannibal Lecter makeunder. 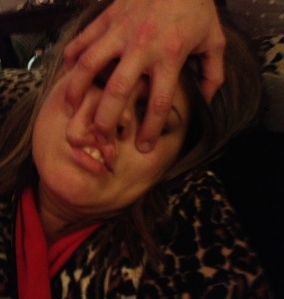 And speaking of makeovers, the duo below locked themselves in my bathroom giggling for 10 minutes.  This is how they reappeared…

Even my beloved martini girl shower curtain received some sprucing up.

All of this glitz and glamour called for a run-through of wedding day hair.

The higher the hair, the closer to Heaven (a Southern girl’s dream).

And after she passed out, our makeup experts practiced a trial run for behind-the-veil day fun.

They went for the natural look, obviously.

After getting her second wind, the bride tried bonding with Teddy.

Who was completely underwhelmed and highly annoyed at her gracious act of kindness at 3am.

After we solved all of the world’s problems by talking just to hear our own voices, we all went bed with a lovely view of the room.

Are those chips spinning above us?

After our two-hour good night’s sleep, we awoke to our thoughtful ‘artwork’ that appeared to come out of a frat house packed with 19-year-olds.  Nothing like a mix of beer, vodka, champagne, peppermint schnapps, Kahlua, tequila and Chambord bottles for morning after feel good moments. 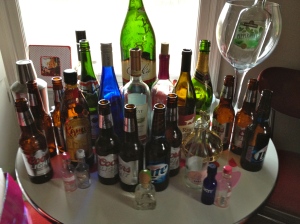 We were really happy for the bride-to-be, OK? OK?!

After a much needed brunch of grease, I walked into my mini-manse greeted by my sweet Teddy Bear who was apparently pissed we kept him up so late (every party has a pooper – I just didn’t think it’d be my fur baby!).

His favorite don’t F with me face.

I ran to the bedroom to put on my pajamas (the Cray Cray Cat Lady pair – to butter Ted up, as their his favorite).  I was gone all of 30 seconds and returned to this…

The little shit only stayed awake long enough to give me the “THE LOOK” when I walked through the front door.

But then I died when I saw that he literally face planted into the back of the couch.

A chip off the old block. So proud.

Why try to be classy when it’s so much more fun to be fabulously trashy? I know what you’re thinking.  And the answer is yes, I’m available for party planning.  It’s an all around shit show of a good time.