About five years ago, I welcomed Teddy Bear into my life.

I found him at the Nashville Cat Rescue where he’d been saved from a one bedroom apartment full of 30 cats. And he was obviously the low cat on the food chain there, as he didn’t dare jump on any furniture, never ever meowed about anything and was scared to let me hold him even for one second (my how times of changed).

At that time, I had a partially screened in porch. My new little Prince Teddy had such a sweet, timid demeanor, I would let him sit on the porch alone and was thrilled he was happy to sit on the chairs and relax in the sun. 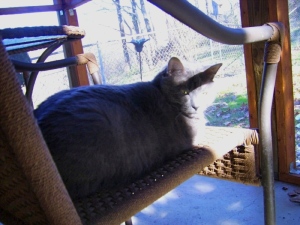 Soaking up the sun.

And then after a few months, he suddenly came out of his meek shell, deciding that he was King of the Porch (or maybe even the jungle) and this happened – 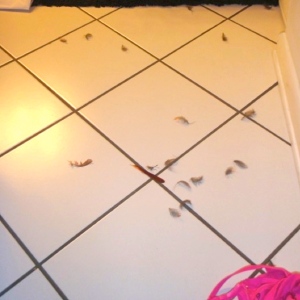 King Teddy ‘presented’ me with a beautiful cardinal while I was soaking in the bath one evening. First, I screamed bloody murder. Then I thought the poor cat’s jaw was going to break because his mouth was open so wide. And finally, I freaked when he wouldn’t let the bird go until a towel was put over his head. (The bird lived, which I was also in worried tears about, naked, soaking wet in the bathroom). Ultra relaxing five minutes.

His Royal Highness got very daring  on the porch after the Great Bird Incident and he attempted to escape to a nearby bush (about four feet away) which turned out like this: 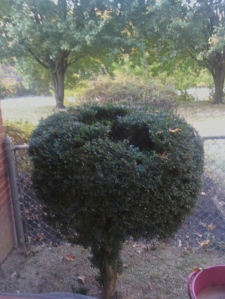 Body outline of my Bear.

He climbed a top the railing and apparently thought the bush was sturdy enough to hold him up (Teddy sometimes has blonde moments like his mother). It was super fun trying to get him out of the damn tangle of limbs.

The porch was promptly screened in all the way to the ceiling for my blue blooded attack cat. 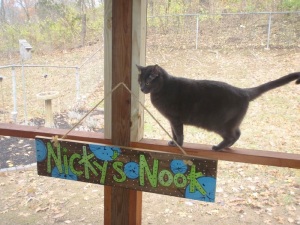 But of course, King Ted was always looking for a way out. 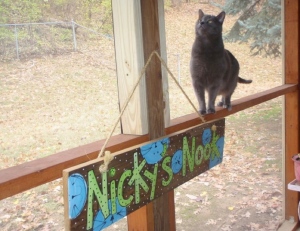 Now in my cozy mini-catsle, I’m the evil Queen happy to keep Ted preserved behind glass windows, knowing that I won’t have any unwelcome gifts or a clumsy cat stuck in a bush. 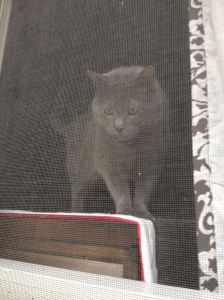 Behind the screen, right where a King belongs!

From our Kingdom to yours – Happy Friday!

43 thoughts on “King of the Catsle”