Just as I was grumbling to myself about yet another weekend being full of precipitation here in Nashville, a co-worker came up and said, “did you see what is on our back dock?” Of course I high tailed it to the rear of our building to see a cute little turtle that I immediately wanted to pick up and take back across the street to the river bank. 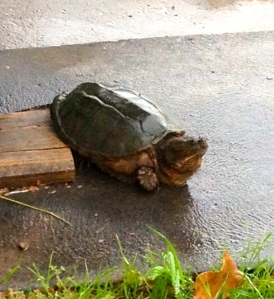 At a glance, I thought this was just any old regular turtle that I frequently stop my car and move from the streets of my neighborhood (did I also mention that I brake for chipmunks, squirrels, birds, fox and any other creature that may be roaming the streets of Nashville?).

But it turns out that this is a snapping turtle (being blonde is hard work!) and it hisses. And bites. And has a neck that will spin around Linda Blair Exorcist style and snap (hence its moniker) your finger (or entire hand) off (this isn’t the first time I’ve misidentified a four legged friend. I once tried to pet a raccoon after seeing it in the garbage can after after an evening with Skinny Pirates. I thought it was a cat…). 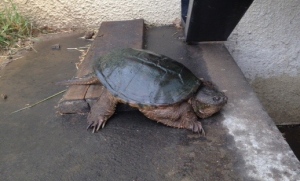 Look at the nails just begging for polish! 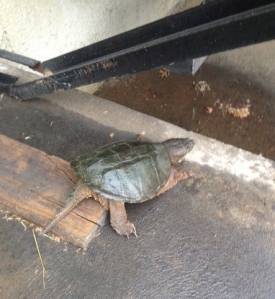 This turtle is in dire need of a pedi.

Sure that I could be the turtle whisperer, I crept (in my leopard rain boots – probably not the best camo while trying to be incognito) up within two feet of this hard-shelled creature and immediately heard a friendly hiss which stopped me in my tracks (I’d like to keep my ten fingers in tact). 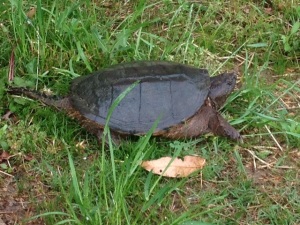 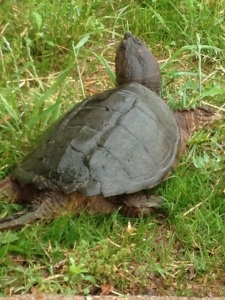 I really wanted to touch his shell…but remembered all of my kick ass rings I adore wearing.

Instead of rearing its head around when hearing the crunch of soggy grass and sticks, my snapping friend started retreating back into his shell. Which is when I thought it might be a good time to try to move him.

Before I started the turtle’s escape plan, I asked Human Resources if I could get Worker’s Comp if I lost a finger in the process. The response was “No, but we’ll call you Stumpy from now on.”

The turtle remains on our back dock (out of harm’s way for all of you curious creature lovers).

You can take the girl out of Iowa but this chick is bringing some Iowa back to Music City in her carry on.