A free weekend can be all kinds of fun, as long as you just roll with it. Which is exactly what I did…

Ted and I tried hanging a few things up around the new mini manse. He was more than eager to investigate and approve any and all decor I was preparing to display. 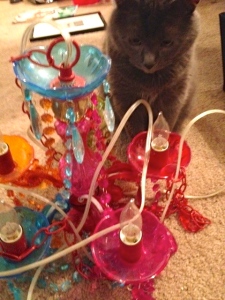 Taking an overview of the product.

Taste testing the product (and trying to mimic the fried pussy cat on “Christmas Vacation”).

Although, this pretty piece didn’t get to hang on my ceiling after all because I couldn’t get the damn hook to stay in whatever cheap material the builders of my mini manse used 35 years ago (I had all kinds of nice words to say about it, too). So, Teddy’s delighted to gnaw on his now favorite chew toy that occupies a corner of my floor (which I have put tape around the cord – sticky side out – to remedy this new habit. And it is hysterical watching a cat react to being stuck to something for one second).

After all of the chandelier nonsense, I needed a cold, tasty cocktail and what better to do on a Saturday night than drink Skinny Pirates with pals?

Mermaids. They DO exist!

My friends had an overflow of liquor that they wanted to share, so of course they called a cocktail expert in to help.

My expertise of photo bombing has become somewhat of an epidemic, as it now happens to me regularly.

As the evening wore on, I collected new buddies to adorn my cocktail glasses. What goes together better than a donkey, giraffe, deer and a mermaid? 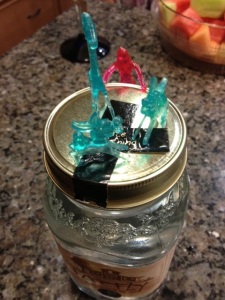 While I was busy playing with pieces of plastic, one of my hosts tried to tell me that I did this single-handedly…

Did I do that?

Now, I will cop to putting a dent in the Captain Morgan but I’m pretty sure I’d still be having my stomach pumped if I double downed.

Upon my return home, I was greeted by an extremely pissed off pussy.

The look of losing beauty sleep.

I tried to coax Mr. Bear back into a good mood by making one of his favorite dishes…

Peas. (You thought I was going to say steak, didn’t you?)

Which won him over with the ease.

I know how to get this little monster.

And we were back to being snuggle buddies in no time flat. 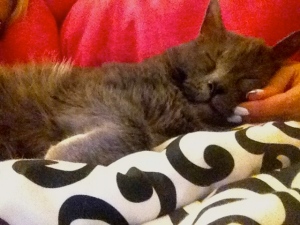 Just what a hangover ordered.

Thanks to the veggie, all is well at the CBXB household. Phew.

“In the end we will remember not the words of our enemies, but the silence of our friends." - Martin Luther King Jr.