Last week I told you about a babysitting post I found from a hillbilly named Daryhul (in his own words, Bibbysiter Avaelable) on Craigslist (click here to view entire ad). While Daryhul seemed to lack the skills and expertise of grammar, spelling and the ability to use his brain, I thought I’d give him a whirl in watching my fur ball Teddy B. because the dude looked like so much fun (plus, I needed time away from unpacking my new mini manse). 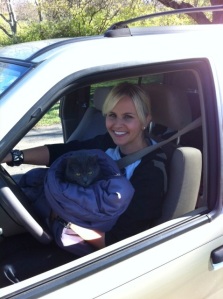 All aboard to Daryhul’s house (or rather, shack).

I mean, how could Ted not be happy residing in the bib of these overalls? 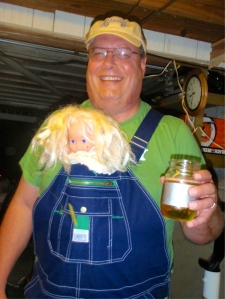 Snug as a bug in a…well, maybe not rug but scratchy denim material.

Apparently Mr. Bear didn’t agree and sent psychic signals to his buddies Zak, Roxy and Moe who we sometimes read about on our buddy David A. Vudragovich’s blog. Here’s what David had to say about his attempts at rescuing Ted from Daryhul’s bib overalls…

So our hero Teddy the Magnificent (close resemblance to stunt double in picture below) has been left at the craigslist.com Bibbysiter! GASP! THE HORROR!

What we are trying to save Teddy from…but since this image was on Google images…we may already be too late!

One of his nine lives dangerously close to being stored in overalls while his human was off enjoying too many blue mason jars with Kitty, Muffy and Ellie Mae!

And this is where you join the story.

Cowboys and Crossbones (CBXB) has offered to let me finish Teddy, the Supreme Fluffy’s story and daring rescue, which will involve my three feline masters (yes, I admit, I live to serve the fuzzy ones, thank you for the swats)!

I have known CBXB for a bit here and I know I need to have some dramatic flair to be worthy of Teddy’s approval!

So I was going to have my three Katz bust out the heavy-duty powers of the Gods (actually just Zeus) but…I think there will be too much static in the air and I am sure you know what that does to fur! Plus their little noses will get shocked, completely unacceptable.

So what to do? What other strategy is there?

I GOT IT! I can let my Kitdies (you know a combo of kitten and kiddies?) CHARGE right in! Just ignore the writing on the picture and think “CHARGE FOR TEDDY!”

But my three run at different speeds and there are four Katz in the photo so everything is just so wrong!

Things are starting to look desperate for Mr. Ted!

Then I had a thought!

We can drive to Nashville and rescue the fellow Blogger Kitten from the overall clutches of Daryhul!

But there was still some kat nip in their systems from last night’s party and they know not to drive under the influence!

So in the end this is what happened:

Zak scowled at me for not being a better story writer.

Roxy hid in the back of the cabinet so she would not end up in overalls too!

And Moe played spooky kat and watched me fail as a kat rescue planner (good thing I have my day job as an insurance agent to fall back on).

So I think Teddy will just have to wait for Cowboys and Crossbones to return with her friends, from being on the prowl (watch out guys), and pick him up tomorrow.

Thank you for reading and send kat nip laced thoughts to Teddy!
Dave 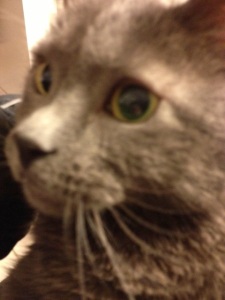 WTF were you thinking? I HATE YOU!