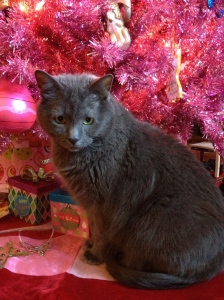 Have lap? Will sit.

When Ted and I hosted a ladies cocktail party recently, things began normally.  My Christmas bear started off sleeping under a table, acting as if he was bored out of his mind while the celebration shenanigans unfolded. So typical of a feline, yes?

Host with the most.

But as soon as the gals started posing for pics, Teddy came out of his party cave to get a little loving and attention (as he is used to being the only star of my show).

Then it slowly started before my eyes…

A scratch behind the ears from another…

Wrapped up in the arms of another… 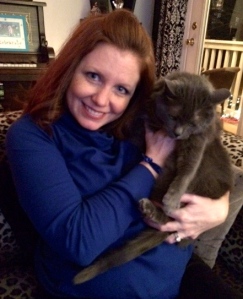 Willingly mauled by another….

Snuggling up with another…

And when I was finally able to pry him out of another party goers grip, I expressed my dismay at all of his ladies man tactics.  In response, TB whipped his tail around and knocked over one of my favorite pics of us together….think that I’m getting what I deserve for stuffing my kit cat in all kinds of fun costumes?

I think someone is still pissed from our Miley and Robin Thicke Halloween costume. What a little shit (I mean seriously, doesn’t he realize being my fur baby comes with costume obligations. Duh)!

After the party, I tried to smooth things over by coaxing Ted up into my bed for our typical sleeping ritual.

Don’t even think about picking me up.

I’ve been sleeping single in a double bed ever since the party was over, continually being educated by my feline as to why he had every reason to cheat.

I get it, I get it. But I’m still stuffing him into this year’s Christmas outfit.

Wonder how long I’ll have to pay for that….?

54 thoughts on “Why is My Pussy Always Cheating On Me?”