It’s not every day you go on vacation and meet your soul mate. 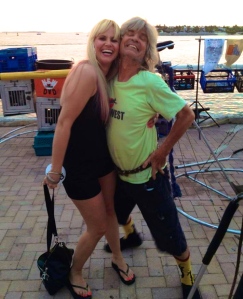 We all know by now that I’m a cray cray cat lady. If you don’t believe me, check out my bawling episode in Ernest Hemingway’s cat cemetery post from last year. 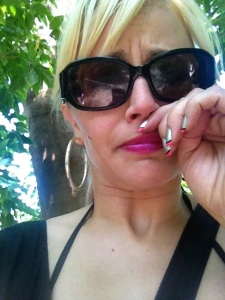 So imagine my delight when I realized there was a living, breathing male pussy loving version of myself when I visited Sunset Pier in Key West.

I knew as soon as our eyes met that he might just be the perfect man for me (I mean, he lives in on the beach and hoards cats like yours truly albeit he’s about 65) as he wrangles seven cats with the ease of me slurping down a Skinny Pirate.

Back in his glory days tempting ladies with that mullet. And that vest.                 photo  catmanofkeywest.com

What’s the most telling sign that we’re meant to be together (besides the fact that his name is Dominique and he speaks with a French accent. *sigh*)?

The fact that he’s known as The Cat Man.

I took this to heart as I was recently bequeathed the nickname of Cat Woman from my pharmacist (after I had to get a prescription filled for a stray cat I’ve taken in and lovingly named New Cat – it was a master blaster hearing that name called over the loudspeaker). 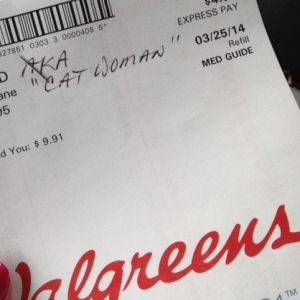 As I watched The Cat Man prep the fur balls for the upcoming show, I elbowed six-year-olds in the head so as I could score a seat in the front row. 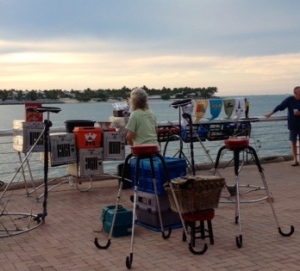 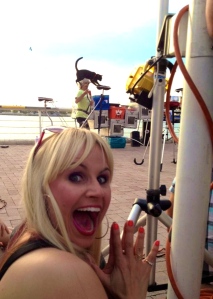 What makes The Cat Man ultra impressive is the fact that he can get cats to do tricks…with each other (anyone who’s ever owned a feline knows how cooperative they tend to be). 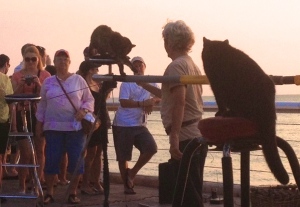 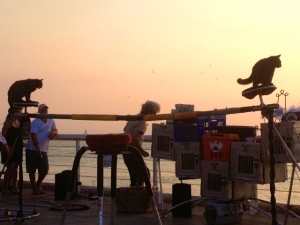 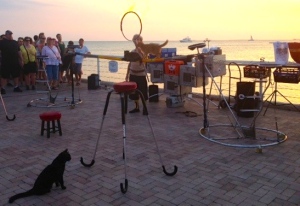 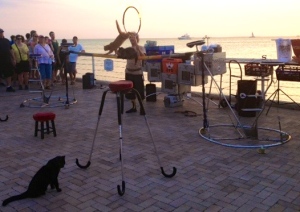 Teddy clearly has some work to do.

What was the shining moment in our budding May-December romance?

Our shared characteristic for the love of a camera. Although I couldn’t really tell if he was flirting with me (and the other 94 peeps that wanted a photo with him) or trying to get rid of my stalking ass after I started to put my arm around him and he said:

“Stay where you are. Go back to your seat,” accompanied by his French accent.

Of course I refused to move without a snapshot of us.

When he caught wind of my cuckoo for Cocoa Puffs mentality over pussies, The Cat Man couldn’t help but lean into my Cat Ladyness and turned me into his own personal Leaning Tower of Pisa. 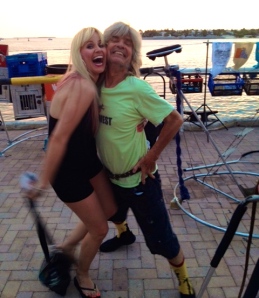 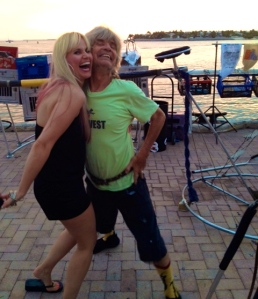 My ass almost hit the pavement.

While no phone numbers were exchanged, we promised to meet again.  Well, really I told him I’d see him again when I was back in Key West.

I’m now practicing tricks with Ted and New Cat in the hopes they can perform along with The Cat Man’s crew next year.

Fingers crossed I don’t set my mini manse on fire.

44 thoughts on “Two Pussy Lovers in a Pod”