This always falls on deaf ears because we all know that Teddy doesn’t have any old acquaintances because he’s too busy hoarding his own time with his fabulous self that he doesn’t see the need for furiends. But ever since we found New Cat (that I refused to name in order to avoid developing feelings and keeping him – and you can see how that worked out) starving at our doorstep on a freezing January night I’ve been gently trying nudge Mr. Ted E. Bear into an amicable relationship with his furry companion that is constantly invading his space.

Teddy and the Tuxedo Space Invader.

While there has been minimal hissing and an occasional wrestling match, these two pussies have gotten along pretty damn well over the past five months.

Except for the time that Tedstar pushed New Cat into a bathtub full of water and yours truly.

And except for the other time when NC was thrust out of the photo spotlight by my camera hog of a fur baby.

Much to his dismay all Mr. Tuxedo has wanted since his arrival to our mini manse is a little love and attention from his much older, aloof, bitchy feline roommate. So you can imagine my surprise when I saw this sight on my patio a few days ago…. 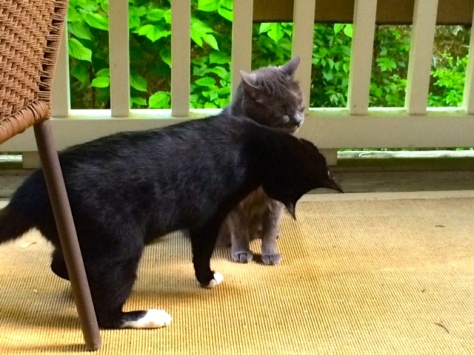 And much to my shock, Ted returned the love.

Of course as soon as I breathed a little too loudly, both cats looked like they’d lost their tongues.

What the fuck are you looking at?

New Cat seemed to think this little licking action meant he and Teddy were finally butt brothers after five months of buttering up to the Mighty Gray One.

Later that same evening they were ass to ass.

I thought Ted was really starting to warm up to New Cat as I glanced down later that evening to find that he allowed the newest resident up onto our bed.

A tumbleweed blew through as I caught this scene.

You see, the bed is Ted’s domain. He is carried (yes I said carried even though he has four perfectly purrfect paws – stop judging me) to bed every evening where he begins with a bath at the bottom right corner and ends up on a silky pillow of bliss by morning.

I put a pea under that pillow just to see if he’d notice it.

Just as I’m about to leave for work, His Royal Highness Teddy Bear decides it’s time to switch positions on his majestic throne, settling in for a day of napping on pink sheets.

Taking the day shift between the sheets.

As you can see there is zero room for any other furry being on this bed of Ted’s, which is why I was slightly touched that TB was starting to share his domain with our newest resident.

Turns out, it was a fluke. Because the following night, Mr. Bear maneuvered himself right in the middle of the bed basically cock blocking New Cat from hoarding even one ounce of the crib.

Mine all mine Bitches.

Curious that I didn’t hear a peep out of NC all night, I almost broke my neck the next morning tripping over the stiff, dramatic loner on the hallway floor as I went to check on the black and white baby. 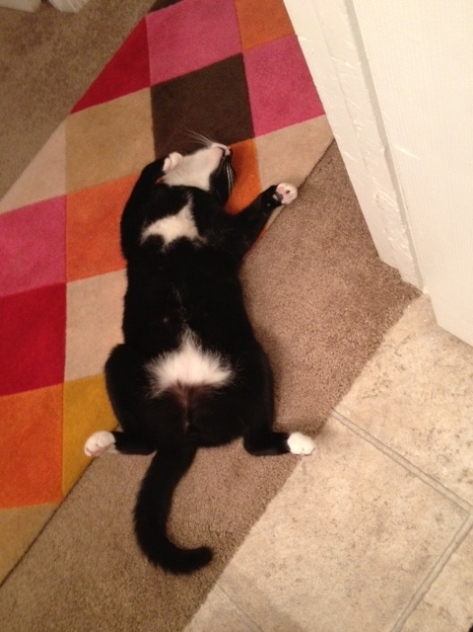 Newie has definitely been taking pointers from Teddy.

As Ted emerged from his deep slumber, I heard him heave a heavy sigh as he pranced past the possum playing New Cat on his way to breakfast.

Two drama kings under one roof….seems like I have a match made in pussy heaven, doesn’t it?

19 thoughts on “Match Made in Pussy Heaven”