A gray and rainy Nashville weekend gave me all kinds of time to explore my newest hobby…being back in a band.

I auditioned a few weeks ago for a cover band that will perform in the surrounding Nashville area and I got the gig. Kicking the weekend off with a rehearsal didn’t suck. 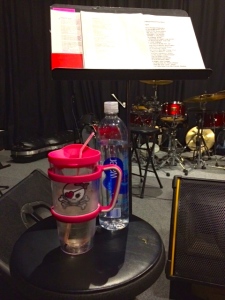 Rehearsal must haves – a Skinny Pirate, plenty of water and lyric cheat sheets. 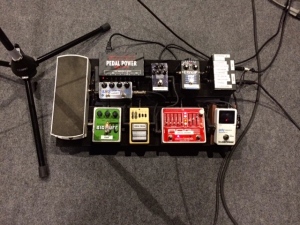 A pedal board must contain many colors of the rainbow. OK, not really but you know I think so.

Being that your worlds revolve around CBXB, I’m sure you’re dying to know the name of my cover band. And I’m also sure you’re not shocked when I convey that we have no name. My creative juices have obviously been stunted because I still own a pussy that has unimaginatively been named New Cat.

What should we call the band?

My main squeeze Teddy advocated us using the name Ted and I very gently told him there was already a movie with that title (and then he demanded to know why in the hell he wasn’t the star).

Coming up with a band name that isn’t cheesy, ridiculous or already used is pretty damn hard. Being that I’m blonde, thinking is already a challenge so this present dilemma called for a cocktail.

A four straw kind of problem.

Seriously? What should we name the band?!

While I was guzzling braincells away, my Iowa twins were sipping on their milk concoctions like it was nobody’s business.

My niece and nephew were extremely busy being spoiled to death by my folks, who were up visiting the twins over the weekend.

And they call him Cray Cray.

Being that my dad was not blessed with male offspring of his own, he takes every chance he can to bond with little Prince B…right down to dressing like twins.

My family’s version of Arnold Schwarzenegger and Danny DeVito.

Pretty sure little DeVito wins the cuteness prize among this set of twins.

Sunday morning, Tedstar and I discussed my brunch attire on the porch of our mini manse.

TB obviously gives all kinds of shit about what I wear.

I settled for the subtly of sequins before noon, naturally.

Keeping in form with my understated style I also wore lipstick when lunging off brunch through the local park. 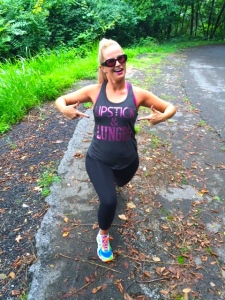 My friend @lilicoffin had her precious Mr. S come out on Twitter and give Ted and New Cat a purr from afar. 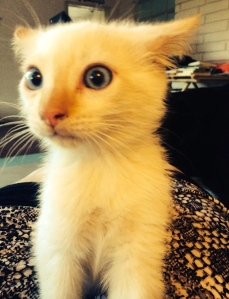 Mr. S is clearly appalled by New Cat’s lack of a real name.

NC assured me he’s fine with his moniker by mauling my neck the remainder of the weekend.

Of course after loving on the tuxedo cat for more than a few moments, I had some explaining to do with my other overly demanding pussy.

Only have eyes for this prize.

I’m clearly creating my very own fireworks this holiday week…