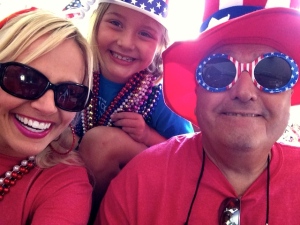 The Fourth of July holiday weekend took me out of Nashville and on a road trip. Much to my dismay, a stop at Kentucky Fried Chicken was part of my journey.

Did you know that KFC proudly serves buffet style?

Menu from my own personal hell.

I opted for anything that didn’t require being served from the dishes and serving utensils surely manhandled by 1,437 people before me. So I got a boxed meal to go, which made me get creative in the bathroom as I didn’t want to set it down on the floor, baby changing station, counter top or any other space that looked as if it hadn’t been disinfected since 1999.

Thank God for my thighs of KFC steel.

Holiday attire is a big must in my book and I was beyond delighted to find mini top hats awaiting my arrival. 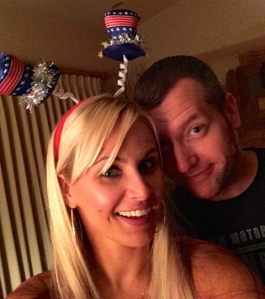 As I was taking fancy up a notch, my dad was busy being the “King of Awesomeness” (who made him this pin? WHO?!) which I assume is a button he will never, ever, ever forget to put on any shirt he wears for the rest of his life.

What about those chubby cheeked twins I adore so in Iowa? They, too, were decked out in their finest holiday threads just like Auntie CBXB.

I was asked to jump on stage and sing with a band that’s been celebrating with Fourth of July shows for the last 20 years.

They flew me in on this plane for the performance. I kid. But that is the stage.

In preparation, my Miami Mini Me helped calm my nerves as she kept a countdown as to how many songs were left before my big debut.

MMM not really calming my nerves.

While MMM was tallying up the minutes before I took the stage, I prepped with mouth exercises to ensure I would be able to get all of my words out. 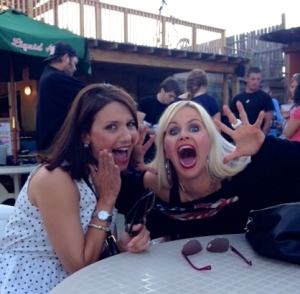 A classy lady and an ass.

Wondering how excited everyone else was for the big performance?

One of my tens of fans headed out to the car without announcing his departure.

He was overly eager with anticipation to my performance and needed to nap it off.

Biggest fan awaiting my performance. Which he slept through. 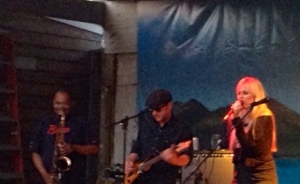 After my debut, we were able to really let our hair down and party.

Not only did we partake in cocktails but we also practiced one of my fave pastimes.

Not to be outdone, my dad had to get in on the photo-bombing action, even if it was mocked up for him. 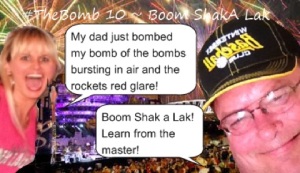 Dad was only successful with help from the always fabulous @WanderinPoet.

What else does a holiday weekend entail? 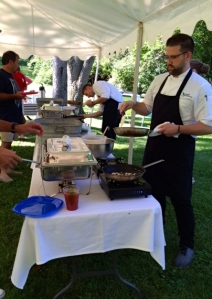 A parade in which I used a Fourth of July decoration as my own personal scepter. 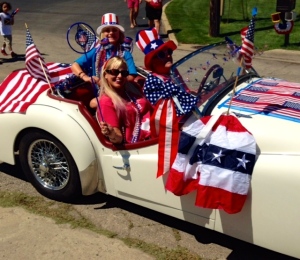 A magnum of wine that had to be consumed. 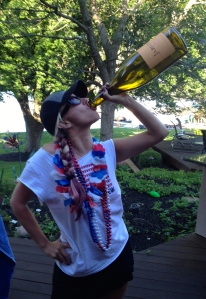 Somebody had to do it…

And naps on concrete retaining walls.

Not to leave me hanging, MMM decided to get a little shut-eye after all of the events as well.

Following in my sleepy footsteps.

On the way back to Nashville, I rode next to Bret Michaels the entire way. 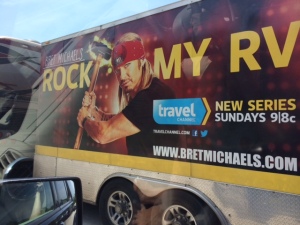 Why does a rockstar rock RVs?

I was welcomed back to Music City by a fabulous care package from my gal pal and fellow blogger Lisa Johnson Sawyer. 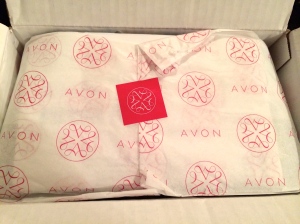 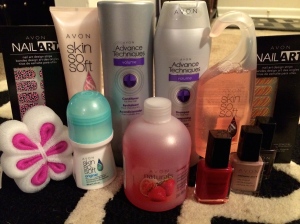 Wanna know what else was full of happiness upon my return home? 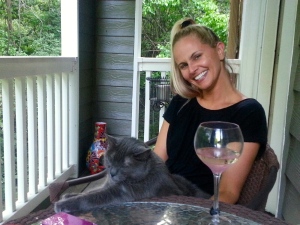 This gray little pussy of mine.

Here’s hoping you’re fully recovered from your Fourth of July holiday weekend…I’m not.

48 thoughts on “Weekend Winks – Oh Say Can You See”