Is it possible to act like taking a private jet is no big deal?

I have a real knack for being trashtacular (i.e. acting a tad inappropriate during insane experiences but carrying on anyway while not giving a rat’s ass because I have zero shame) because every time I try to ‘be cool’ about outrageous things I get to do for work, I tend to look like a total idiot.  So while riding in a private jet, I was my typical fabulously trashy self (at least I’m consistent).

If taking a private plane is second nature to you, there is no need to take a photo of your transportation.

But when you’re classy like me and think this may be your one and only opportunity to ever board a jet like a superstar (I’m the hired help), you go bananas and try to document the trip so you can prove you were actually on the plane.

Fancy folks who typically travel in style (and not always in the back row of coach right next to the fucking bathrooms) are not impressed with the gold-plated seat belt. When I saw the shiny buckle, I acted like it was a solid gold and wondered how I could rip it from the seat and put it in my purse as a memento. 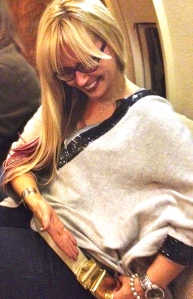 This fabulous accessory should be mine.

Private planes have heavily stocked liquor cabinets that I was happy to help empty.  And, when you constantly travel via private jet, you know to sit in the seats with cup holders to hold your tasty beverages.

Not me. When I boarded, I just had to sit on the couch because the planes I normally ride in don’t contain living room furniture.  Therefore, I had my neighbor hold my wine glass when my hands were busy.

The truly fabulous jet setter knows that pilots fly the plane.  But I had to capture the moment in the cockpit in case I forgot. 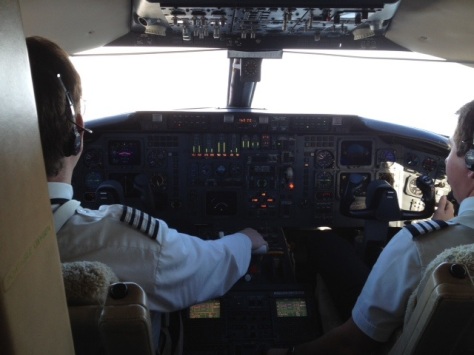 Pilots flying a plane. How outrageous.

After helping the flight attendant clean out the liquor cabinet, I had no shame in becoming her best friend. And of course I had to solidify our newfound friendship with a photo.

The ever patient Chelsea who provided endless refills and most likely wanted to punch me in the face by the end of the flight as I was not the model passenger.

The fabulous jet setting crowd know that they can carry whatever they want onto the aircraft.

Being a giddy idiot over a gift basket I’d received during the trip, I paid no attention to putting one foot in front of the other and spilled its contents boarding the plane, horrifically watching my loot hit the tarmac (you can breathe a sigh of relief – all of my goodies remained in mint condition.  Although I don’t think the flight crew had ever seen anyone loose marbles over a cookbook the way I did as I galloped down the stairs to collect my scattered possessions).

I’ll be damned if this is going under the plane.

And after all that running around the runway, gathering my basket belongings, I hustled up into the plane to get a snapshot of myself acting like a lady of leisure in the talent’s seat.

Oh Dahling. This old piece of metal? No biggie, I fly around in it all of the time. Where’s my glass of champs? CHELSEA!

This private jet thing is no big deal….unless you’re an ass clown like myself – and then it’s the ride of a lifetime.