Now that I’m officially on my way to being a bona fide, living, breathing, crazy as hell cat lady after recently adopting two more felines, we’re all getting settled in our new routines at the mini manse.

Such as sitting on my face while I try to read before bed on Friday night.

Eddie making himself right at home.

While the start to my weekend low-key, I found myself really missing out on the fun I usually have making an ass out of myself at the Iowa State Fair. Luckily, Aunt Crazy Pants was able to be a substitution for me.

CBXB jazz hands for everyone!

Knowing the fair was hand crafting menu items just for me made it all the more difficult not to be there, typically eating my weight in battered and fried hot dogs within a mere 12 hours. 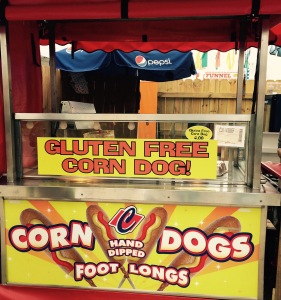 However, I had way more serious matters to tend to. My sweet little baby bear has been feeling awfully ill lately and made his third trip to the vet in two weeks.

But no matter how unwell Ted is feeling, he can still be such a little bitch showing his obvious disdain for myself for taking him to the vet, the vet for accosting him in areas rather unmentionable and also because he’s just a plain old piss and moaner.

Telling me where to shove it with those eyes.

One of the many nicknames Tedstar has received is Teddy Krueger…which I was reminded of when I tried to help the vet (and the vet tech) hold his mouth open for an oral examination.

I feel like we have our Halloween costume nailed down for this year.

Hanging with fabulous friends helped boost my mood on Saturday evening, putting my anxiety and worry on a much needed back burner for a bit. 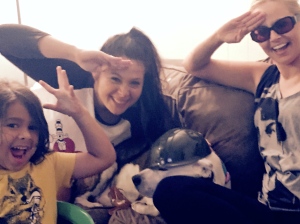 And of course wine always help sugar coat any situation with angst (in my case anyhow).

My version of water.

Also lifting my spirits this weekend was my niece Princess B, who decided to play in her mom’s makeup.

Speaking of looks, Prince B just about melts my heart every single time I glance his way. Especially when he’s just received a big boy haircut.

My version of McDreamy.

A relaxing Sunday on the lake seemed like the best idea ever, until I had one too many Wild Ginger alcoholic beers…

This could have been tranquil.

…and thought that spending 20 minutes on a bouncing tube, making my body contort into all kinds of positions only a Cirque du Soleil performer should be aware of was a better way to take it easy.

Realizing that I may be forever walking with a cane due to my boozy boating decisions, I tried to unwind (and untwist muscles that I never knew I had) by soaking in a bubbly tub. Except Clark and Eddie had other ideas.

Yes, one ended up in the tub.

I was able to wrap the weekend up knowing that Ted was catching up on rest even though Clark really, REALLY wanted to cuddle (even after 428 warnings from a grouchy sick pussy not to). 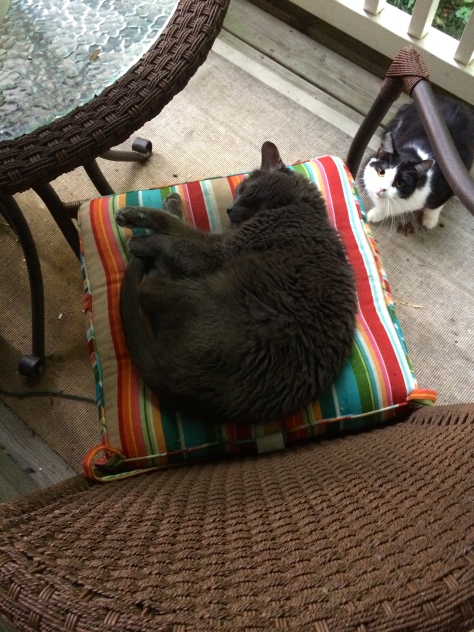 Ted’s new best friend – whether he likes it or not.

As the week moves forward, we’ll be taking all of the good karma we can get as Teddy goes in to see the vet this Thursday yet again.

I’ll be wearing gloves up to my elbows this time.

40 thoughts on “Weekend Winks – Under the Weather Pussy”