As many of you well know, my beloved Aunt Crazy Pants passed away after a valiant fight against terminal lung cancer (after never smoking a goddamn cigarette in her life).

By the time cancer was found through an unrelated surgery, it had already spread everywhere but her brain and she was given six months to a year to live in June of 2016. Well, being a feisty little bitch, she survived with cancer 370 days.

While it’s important to remember that when someone may no longer be among us on earth, our relationship with them can still exist, it’s also important to remember the quality of life given during an especially grueling battle with cancer. ACP’s youngest son R. Nasty made sacrifices I can’t say many young adults his age – let alone any adult – would do to care for his dying mother. I mean before being diagnosed with cancer, she was already the most dramatic woman on the planet (like bitching about “having” to pack to go to Hawaii – or any other fabulous destination…yeah, poor thing), so you can imagine the sheer joy the magnification of her theatrics became.

R. Nasty moved in with his mom (all young men’s dream come true) being closest in proximity and able to make accommodations to do so, while his other brothers and extended family lived further away. 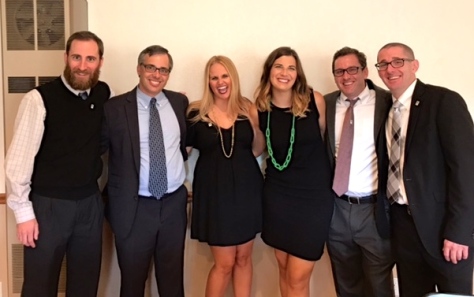 All other Bros and Hos live far away.

He answered every time she hollered with a patient, “yes Mother,” sauntered into her room after every bell ring (a sound that will surely haunt him for the rest of his days), removed an ice cube each time he accidentally put four instead of three into her water and endless other duties that come along with caring for a cancer patient.

The true meaning of ‘got your back’.

My point is, this dude is a fucking saint. Throughout all the treatment routines, doctor’s appointments, therapy, surgeries, etc, ACP’s absolute favorite time was watching The Late Show with Stephen Colbert with R. Nasty every weeknight. Even if she dozed off in the evening as she got more cancer riddled, she wanted to be woken up to watch Stephen Colbert with her son.

Wake me up before you go go!

In the evening on August 31, 2017 my feisty aunt was taken from home hospice to the hospital. That night, as the end was drawing near, the room full of family was clearing out and R. Nasty leaned in and said, “We’re going to watch Stephen Colbert one more time, Mom.” And that they did. She died at 3am on Friday, September 1st, 2017.

While we’ve partied in every way possible in honor of Aunt Crazy Pants’ love of life, I’d like to acknowledge the sacrifices her son made so selflessly. When asked about it he always says (and still does), “it’s my honor to take care of my mother.”

So how can you show a small token of appreciation in return to a son who lost a friend, a mother and a fucking funny lady all rolled into one? Sister CBXB came up with a great idea, reached out to me to execute (why do I have to do all the work?) and with the help of some letter writing, reaching out to every.single.contact I have and making them reach out to every.single.contact they have, magic happened. 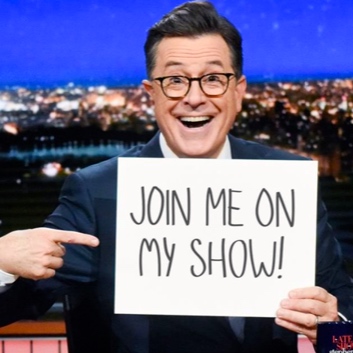 Don’t mind if we do.

Through the efforts of fabulous friends and the help of family, we were able to pull this shit off and I scored two VIP tickets (yeah, you read that right – VIP bitches) to The Late Show With Stephen Colbert. R. Nasty and I will be gracing our small kids in the big city presence in the Big Apple next week for a taping of the show on Wednesday.

We’re coming to annoy the fuck out of you New York.

Now, I have a hard time finding the bathroom at work, so I have NO CLUE how we will manage roaming a city the size of my home state of Iowa. I’ve never been on a public city bus. I’ve never been on a subway. You’d think that I would have some skills now that I reside in Nashville but sadly, I barely know up from down let alone east from west. Blonde is hard, guys.

Regardless, I can’t wait to make an ass in the city as big as my ass, with R. Nasty patiently waiting out my shenanigans. Or maybe silently fuming. Either way, it’s gonna be a fabulous way to celebrate ACP’s life with a whopping side of shit show.

Cheers to the craziest fun aunt I got to call mine. We all miss you something terrible but I promise to laugh my ass off at the Colbert show for you next week (after probably tripping and falling down some stairs first).

14 thoughts on “The Big Apple Will Never Be the Same”