While I was all in a tizzy about what to wear to work the Country Music Association Awards last Thursday night, I should have been charging my phone because it unfortunately died due to me acting like I was a member of the paparazzi.

Walking up to the red carpet area, I was overly excited at the first classy thing I saw – a freaking hot dog cart. 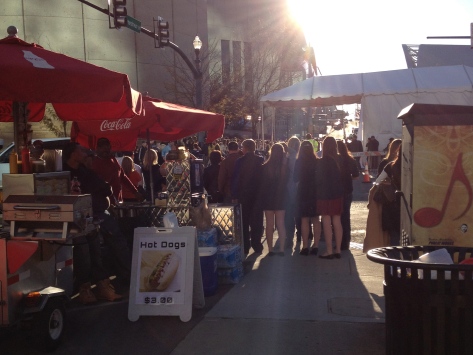 Do you think they sell hot dogs at the Academy Awards red carpet or is it just a country staple?

I arrived at 3pm – the same time all of the D list stars were being dropped at the red carpet entrance. 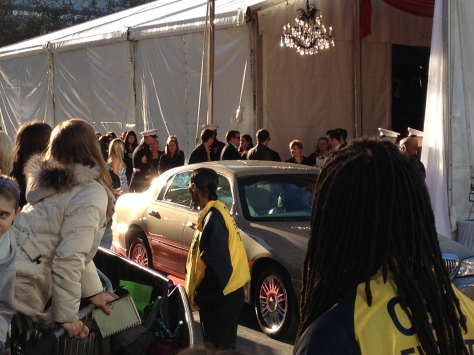 The girl in the cream coat almost broke an arm trying to get an autograph from an American Idol 6th runner-up from 2006. Seriously. 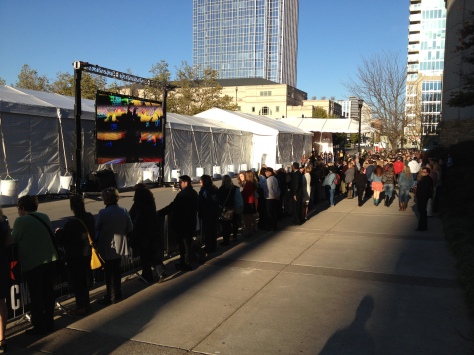 Fans gathering on the red carpet four hours before the CMA Awards show began. If I had more balls, I would have snapped pictures of their snazzy outfits – some combining sequins and Crocs.

In case you stayed WAY past the start of the show (as most fanatics do), you’d need to leave your sunglasses on if you’re prone to migraines or seizures.

Moving my way around back to slide into the mover and shaker scene, I felt the same way about the rear of the red carpet as I do about my own backside…needs a bit of work.

The ass of the red carpet is also where stars sneak out after they’ve had their photo taken by media and don’t want to walk down the long line of TV interviewers. I recognized as many ‘stars’ that came through the back entrance as they did me. Zero (apparently anyone can be a country singer these days. Just attach a cowboy hat to your head or wear mirrored sunglasses at night or really go out on a limb and do both).

The scene of a photog’s dream (and mine, since I was about 6 feet from all of the upcoming action. And I was extremely busy pretending this was no big deal, while having to bite my cheeks to keep from smiling too big from giddiness).

While I was busy acting like I didn’t give a rat’s ass about my surroundings, I was constantly ducking out-of-the-way for the CMT’s Katie Cook and Evan Farmer, preparing to interview all of the celebs.

After giving my thighs a squat work out from my continuous up-and-down-out-of-the-camera’s way calisthenics (and trying really hard to be nonchalant about the whole ordeal), the big stars were just about to appear in front of me.

Phone out. Camera app on. Flash off (God forbid anyone think I’m taking a picture. I may be a little white trashy but sometimes I do know when to save face).  Holding the phone out from my body just so (pretending like I can’t see the screen up close). Positioned just high enough (so it doesn’t look like I’m taking a picture).  Phone rings. Boss needs me now. Damn it!

As I disappointedly turn to walk out (I had a red carpet spot!), I hear the photographers shout, “Sugarland, over here!” 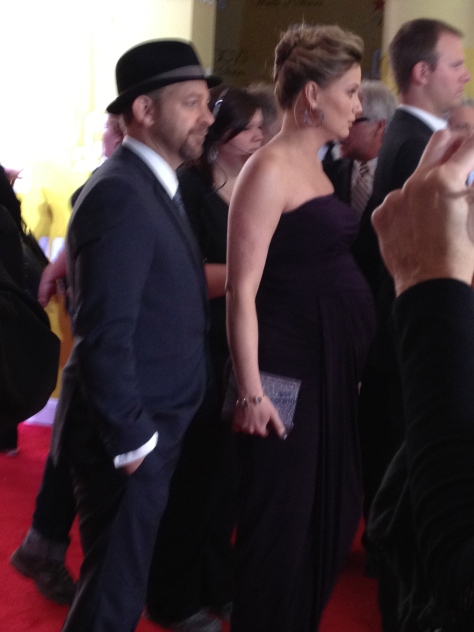 And being the classy lady that I am, whipped around and snapped a blurry picture, complete with flash on my way out. Score!

Oh, and I got a hot dog on my way to the show in case you were wondering.