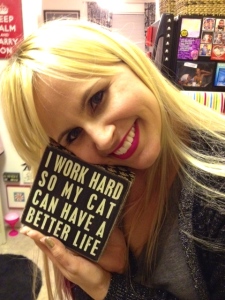 For some odd reason, even though I shower the little love of my life with more affection than a newborn human, he can be so bitchy.  Many times when I’d like to scoop him up for a photo-op, he loves me not.

Still not loving me.

Forced to love me.

Teddy gets extremely annoyed with football season, as every Saturday becomes a drunken moonshine guzzling family affair and he isn’t afraid to showcase his disdain.

No pussy love for tailgating. 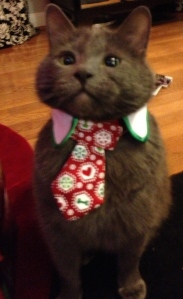 Or dress him up in a bee costume… 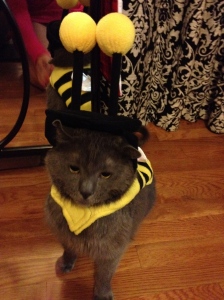 Desperately wanting to sting his mother. 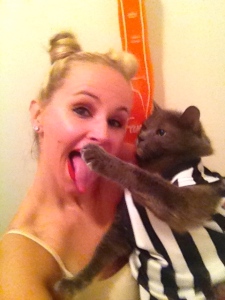 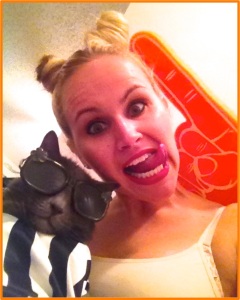 For sure hates my guts.

Or make him the Catman to my Catwoman.

What I do know is that regardless of whatever giddy up I shove Tedstar into, he always warms up (after some treats are dispersed – green peas are his fave), comes back around (once I have thoroughly massaged between his ears, under his chin with the grand finale of a belly rub) and gets in the saddle once again to be my constant sidekick. 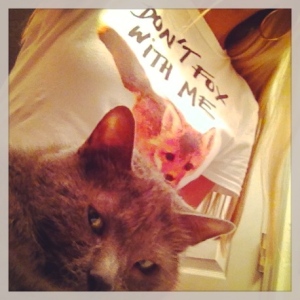 And when a hungry, crying, soaking wet cat showed up at the door one cold January night, I couldn’t help but take him in and try to find him a permanent home, which ended up being mine. Introducing a new pussy into the mini manse, Mr. Bear wasn’t sure what the fuck I was thinking and proceeded to act as if I ceased to exist.

Who is this and what is it doing in my manse?

Ted made clear that he was the man in charge, even when it came to the dreaded photos in which I always make him pose.

But eventually, I was kicked to the curb and a new love story began to blossom.

Brotherly love.
Just before it broke out into a wrestling match.

But no matter how much my main pussy loves to hate me, we always kiss and make up.

Whether he likes it or not.