A Nashville weekend for CBXB complete with a little kit cat time, preseason NFL football and a whole lotta lazy in the sun.

The number of cups equals the amount of fun had at a Titans game, FYI.

Friday called for a little relaxation out on the patio of my mini manse. 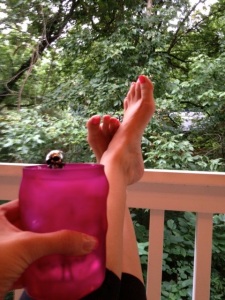 I was trying to unwind under my bright lights that annoy the piss out of my neighbors (someone had to be the Clark Griswold of the neighborhood!) but the incessant whining from some little furball inside made it impossible for me to concentrate on reading my People magazine and chug my Skinny Pirate. So I let the little whine calf out.

And I immediately regretted my decision as Teddy sprinted to the end of the deck, dramatically putting the front half of his body out over the ledge and meowed (what he surely thought sounded like a lion’s roar, but sounded like a sick goat) to announce his presence to no one. I thought, “Great. My family is going to have a heyday with this story when the apartment complex calls telling my folks that I broke my neck jumping off my second story deck to save my cat, Mr. Bear – who would of course walk away unscathed.” So instead of freaking the F out and yelling at him, I casually pulled him in and yelled “NO!” once he was back on all fours of the appropriate side of the deck.

You go, I go you little shit.

Once every nook and cranny was checked out, it was time for tricks.

And while practicing his balance, TB acted as if he was doomed to be on the porch forever,  trying to claw at the window screen. 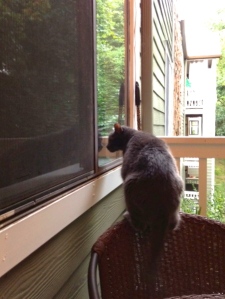 Once again yelling “NO!” (you see how scared Ted is of me?), he tight roped down the chair and settled in for a nice, long cat nap. 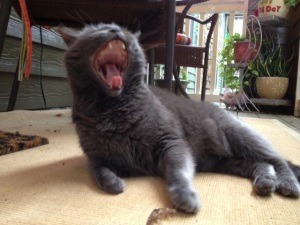 Worn out after the circus tricks of the prior evening, I hauled my lazy ass up to the pool on Saturday. Where I continued to be lazy. All. Day. Long.

All I was missing was a tan.

A spontaneous invitation to go to the Tennessee Titans game produced all kinds of fun with my First Mate and her hubs. Although, as I was rushing to get ready, she reminded me that you can’t take a purse bigger than your palm in to the stadiums anymore. WTF?! Where am I supposed to put my sunglasses? My bootlegged liquor? My lip gloss? My ticket won’t even fit into my purse without having to be folded! The horror!

I was still able to mix cocktails in the bathroom bar by smuggling in my spirits.

Although, we were forced to be assholes wearing our sunglasses at night because we had nowhere to put them.

While we started out with our vodka and beer, First Mate and I HAD to have a glass of wine once we saw the container it came in.

Reusable AND it has a lid!

The mixing of liquor, beer and wine gave us a really good idea for a blog post. I’m going to try out to be a Titans cheerleader next year and First Mate will document my uncoordinated experience. You’re welcome in advance and I am not eating solid food until after tryouts next April (but I refuse to give up my Skinny Pirates).

All I need to make the cut is fake boobs, three more inches added to my legs and the ability to make it through a cheer without giggling. I got this.

Parched as we were, a stop at our fave bar Dalts was required before calling it quits on a fun Saturday night. Can’t you tell Hubs was just having the time of his life?

With the best of intentions of going to hot yoga on Sunday, I decided to sweat out the shenanigans of Saturday night by holding a day long savasana pose by the pool.

Perfect end to the weekend…while gaining a teeny tiny tan.

While I sat on my soon-to-be-a-Titans-cheerleader-dreams-dashed-hopeful-ass by the pool, I also studied pics of my niece and nephew practicing their favorite poses.

Not only do they look cuter doing yoga than I do, it seems as if they have better form too. Show-offs!

Here’s a big cheers to a great week!