Ever had a friend who has zero problem making a gigantic asshole out of herself with you?

Ahem. Let me rephrase that. Ever had a friend who has zero problem with you making a gigantic asshole out of yourself while patiently standing by?

One asshole. One fabulous birthday gal.

On college Friday nights while everyone else was out and about drinking copious amounts of beer but you wanted to stay in and make greeting cards with rubber stamps (I was such a slut in college, obvies) and your bestie did, too (I think the love of craft making on weekends kind of sealed our friendship forever fate). Or instead of putting your best black pants on for a Saturday night out (with no coat on in an Iowa December while walking to the bars), you two decided to give being in a band a whirl instead and play air drums and a mean air guitar to Journey songs?

Weekend fun night in Slater Hall. We oozed nothing but fucking cool. 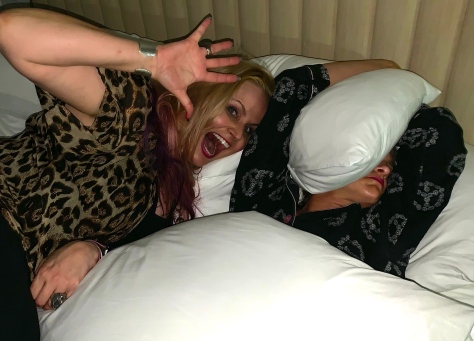 Now we still stay in, the cool just looks different.

Ever had a friend that hid what you thought was a double chin (what the fuck was I worried about back then?) in photos for you? 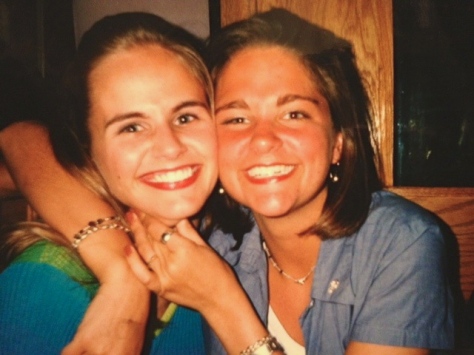 Always there with the assist. 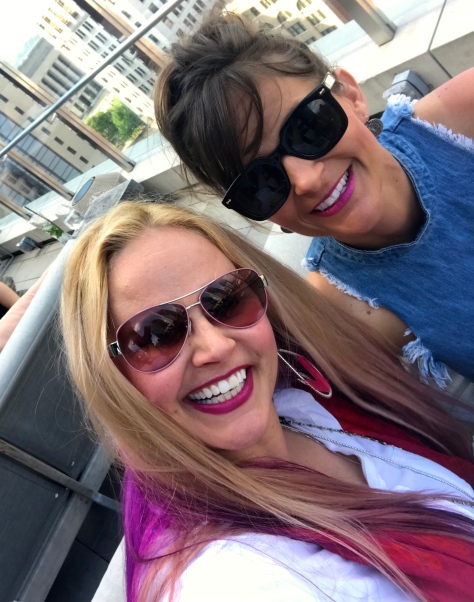 Definitely a two hand job she’s failing me at today.

Ever had a friend geek out with you while studying in the sun, trying to scope out boys on Sunday afternoons? Where, I apparently thought that washing one’s hair and putting makeup on was not necessary (and this was pre-Rapegate!) while trying to land a boyfriend – and I didn’t even have a booze hangover (I didn’t really partay in college – don’t die of shock right now). I had a crafting hangover. Jesus.

Now we’re sweating into our oldies.

Ever had a gal pal who didn’t mind that you framed a picture where her eyes were slammed shut (I’m such a sweet friend) because you thought the rest of the fabulous crew looked on point (and extremely shit faced) on her 21st birthday?

Ever had a friend where you thought it necessary to share the same hairstyle? 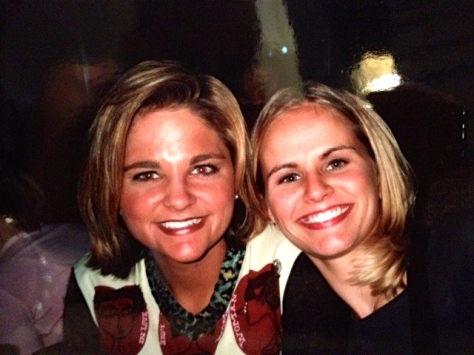 I know! Let’s cut our hair so it looks like we’re trying to grow it out.

Ever had a friend that loved the holidays as much as you – making them all the more memorable?

Santa, where the fuck are you? I mean, it is Christmas in July!

I’m drinking to that today!

Ever had a friend you don’t get to see very often but when you do, you pick up right where you left off no matter how much time has passed between visits?

Ladies who lunch like they just did it yesterday.

Ever had a friend who knows your best stories and lived a lot of them with you? Lucky us. 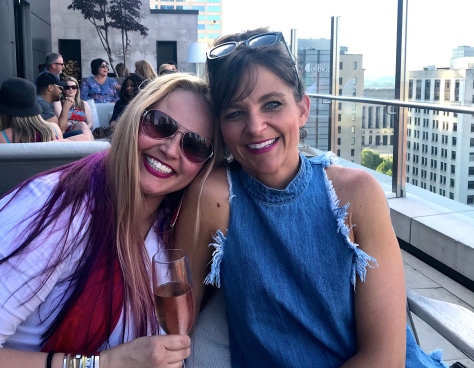 I guess it’s best to say we’re two pretty chic geeks in a pod and proud of it.

Anybody else’s life been feeling slightly off lately?*

*slightly off for me is the understatement of the fucking century but you get what I’m saying.

Ever heard of Mercury in Retrograde? I have but I thought it only had meaning for those who comprehended astronomy or astrology (neither of which I have any sliver of understanding). I mean it involves a planet and a fancy word that means backward so what the fuck would I know about it?

The Farmers’ Almanac explains, “Retrograde is when a planet appears to go backward in its orbit, as viewed from Earth. Astronomers refer to this as “apparent retrograde motion,” because it is an optical illusion.” According to Horoscope.com, it may be an optical illusion BUT “when Mercury is in retrograde, technology, communication, travel, logic, and information all get disrupted.” Ah. I see.

Apparently, this shit happens a few times a year (it’s over August 2 but starts again on October 31 – be prepared for a freak show of a Halloween!). During this ass backward Mercury rotation, I have had a car tire almost fall off due to negligence during my last tire rotation (one lug nut was holding the tire on – there are supposed to be five), ruined an entire work outfit due to white paint around the Mini Manse door that didn’t have a fucking ‘wet paint’ sign, discovered mold in my kitchen cupboard above the stove (which we all know doesn’t get used so what the actual fuck?), found mushy, rotten wood is holding my patio doors together – barely (been 30 days and counting for maintenance), and these are just small examples. Could it be worse? Fuck yes. 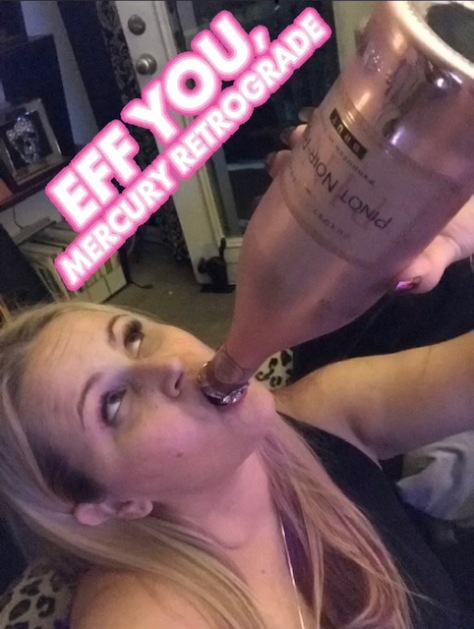 Me. Until Mercury exits retrograde.

Speaking of could it be any worse, Podunk has really had a fucking bout with this spin of the planet.

Instead of sandwiched between two blondes, it was marble.

She had a bundle of marble fall on her and sustained four broken ribs, a torn spleen accompanied by internal bleeding, a bruised liver, a partially collapsed lung and a contusion on her arm. 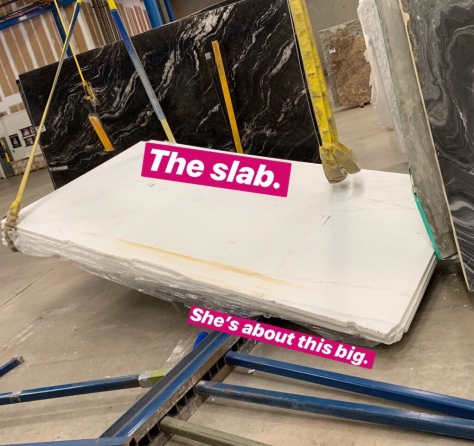 Please send my gal all of the good juju you have for fast and proper healing of her injuries. I’m doing that, as well as hoping she has some leftover feel good meds to share.

I was so excited to see the end of the week I couldn’t get my ass in bubbles quickly enough Friday. I stayed in the tub nearly three hours after work.

Yes, I use every single product you see in this photo.

Prince B has had zero problems with this Mercury bullshit. In fact, he celebrated his Ninjaversary on Saturday. Not familiar with that holiday? It’s when you have an anniversary for ninja class. Duh.

The two faces of Prince B.

What’s a celebration without cake? Chocolate cake with lemon frosting to be exact.

And of course, it’s not a celebration without balloons and matching party accessories.

Always a prince and princess to me.

While Prince B was kicking serious ninja butt, I was trying to keep my legs attached to my body at a spin cycle class. I may have come in last place on the scoreboard but goddamnit I showed up.

What my shirt says.

Wondering about my ever growing gaggle of pussies? Welp, I trapped, spayed, neutered and released two adult cats. When I finally caught the third adult cat and took her in for surgery, she’d already had another batch of kittens. Please be aware of the adorableness below.

There are three kittens total that I’m going to catch and have spayed/neutered. Anybody want one?

The photo below gives me multiplying chills just like Danny in Grease.

Family tradition on the horizon baby!

Longtime friends passed through town and we had a pool party Saturday. I really made quite the impression on their youngster (surprise). 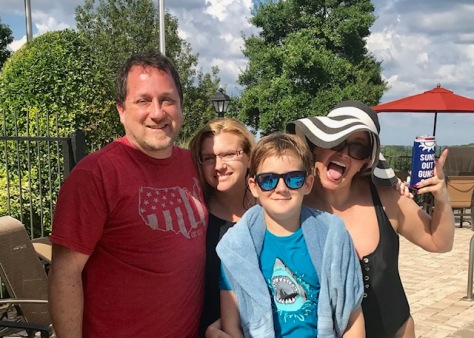 “Dad, she drinks more wine than you.”

I also got to see Uncle Toddy and Aunt Crispie as they made their way through Music City two weekends in a row. They really love posing for photos with me.

There’s always that one asshole in the family.

Keeping it cool on National Ice Cream day were the royal members of our family. 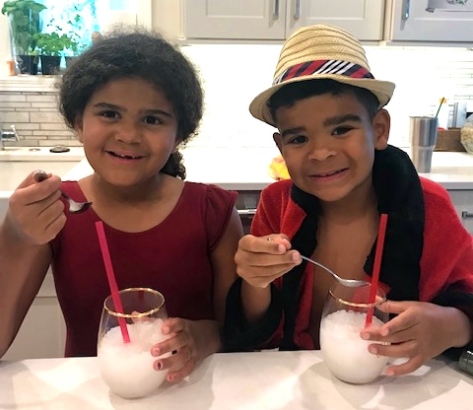 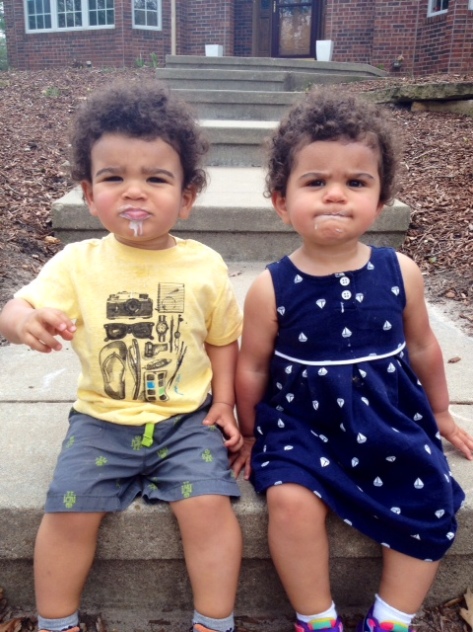 About to scream for their ice cream.

I wasn’t as excited over frozen dairy as I was the Hallmark Movie Channel marathon of Christmas movies. Why? Because Christmas in July. Duh. 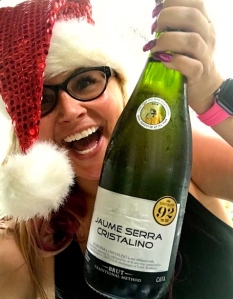 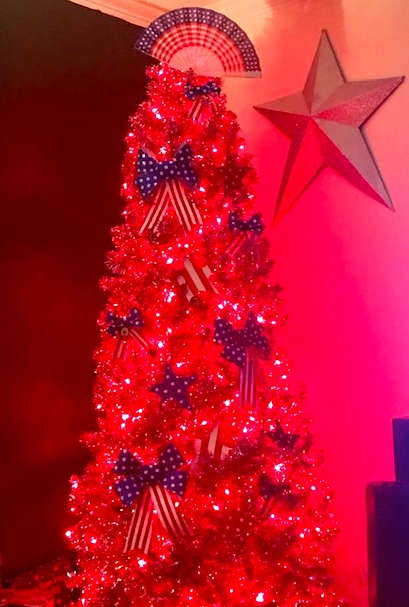 July decor in tact on the year round Celebration tree.

The pussies thought I’d lost my ever loving fucking mind (this tends to happen quite often). 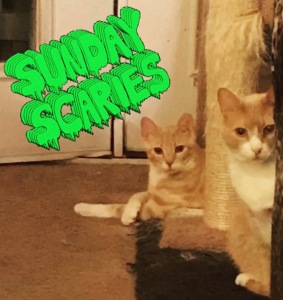 The fuck is she doing now?

They got used to taking turns cuddling during the massive cheesiness in the Mini Manse living room for 16 hours straight.

Heavy rotation of pussies. Thank gawd there’s five of them. 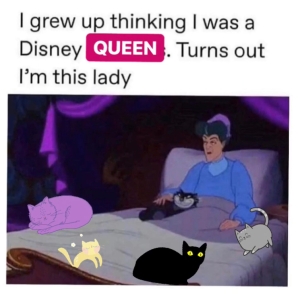 I’m not mad about it.

This week, my ass is going to be planted on my leopard couch, adorned in my Gpa’s 45-year-old robe, along with my sequin Santa hat and rosé. Always, always rosé (during the week). 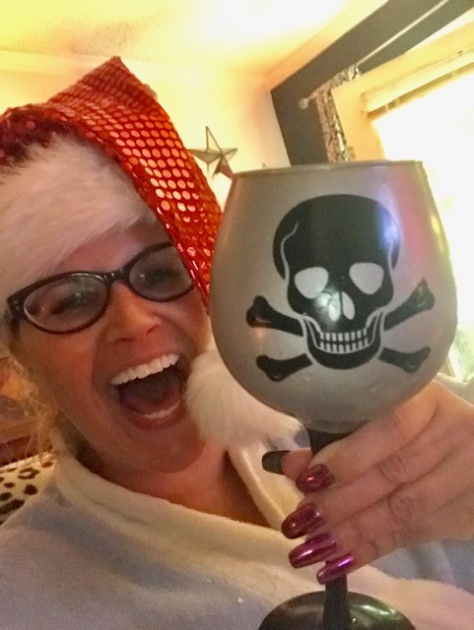 Aside from that, my excuse for anything that goes sideways before August 2 is Mercury in Retrograde. Please feel free to use it for yourself, too. You’re welcome. 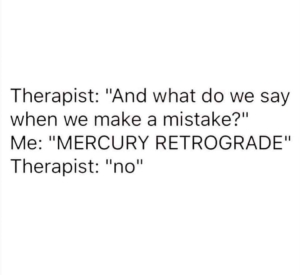 Superhero Sheila can’t wait for my session this week.

However, due to the aftermath of Rapegate, I didn’t decorate my mini manse for the holidays for almost two years (this is the equivalent to giving my animals away). So it was serious business. When I put that goddamn glorious pink tinsel tree up this year, I didn’t have the heart to take it down. So it’s become my Celebration tree.

Just chalk it up to another reason I’m so fucking fabulous: cats, candles, books, and now a year round Christmas tree.

Christmas in July anyone?

At least it’s adorned with appropriate gear…flamingos, leis and sunglasses.

My cousin, B Master and his fam were traveling through Nashville and stopped for a quick bite to eat.

Being a bonus aunt doesn’t suck.

B Master had a relic with him and it’s a super doozie from a craft camp when he was a young lad.

A handmade wallet that won’t even properly hold a dollar bill.

However, it was designed to hold a photo of his favorite cousin, moi.

And, of course one himself.

As you can tell, good looks run in the family.

My side hustle is pet sitting and it was a fun week continued into the weekend with the foursome below.

Side hustle with this wild bunch for the week.

The bonus of this gig was the mega deep jet tub that I could hardly rip myself out of, as a bubble bath is my idea of heaven. 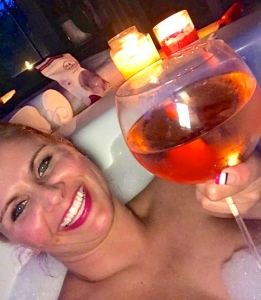 Princess B bucked up her bravery and had two teeth pulled.

No tears, no fear.

These days, the Tooth Fairy leaves behind a little more than I got back in the day.

Two bills a tooth, yo.

Even though Prince B didn’t have any teeth to yank, he proved his bravery by adorning his ninja warrior giddy up.

After a short recovery, it was time to head to an outdoor concert. Not sure why Prince B removed his red outfit.

Who wouldn’t wear a tutu to an outdoor concert?

Saturday was one of the most gorgeous of the summer, so Dada CBXB came in to enjoy the private pool at my side hustle (no, that also didn’t suck – along with the cute animals). 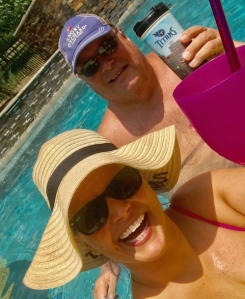 A little gal pal gathering for our friend who was celebrating a big birthday and a move all in the same day.

Sunday was nothing short of a dream day for me. I woke up spooning a German Shepard, while butt-to-butt with the mutt and two cats on each side of my pillow. It took a long while for me to get my ass out of bed but when I did, I headed out to my private pool and relaxed the day away. 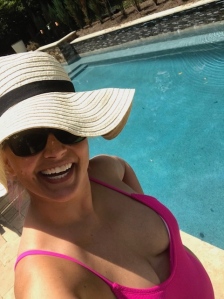 After a book down in the pool and the sun said goodbye, I headed into that bliss bubble tub and read another. 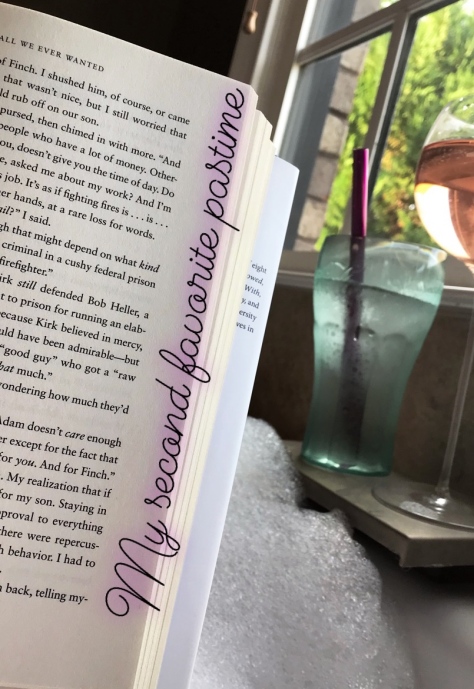 I feel like I may have been a mermaid cat in another life. 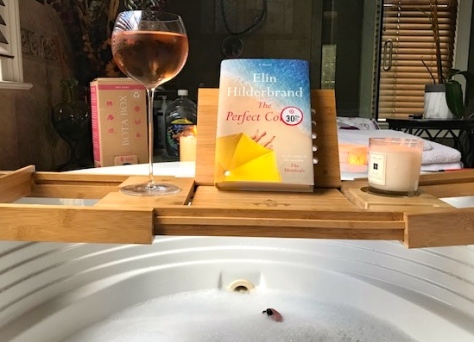 Last week, I shared the love of rosé between Sister CBXB and myself in a post. My smart niece has taken to our slogan, “rosé all day.” You can imagine the family high fives when Bota Box liked the tweet, including my blog post. 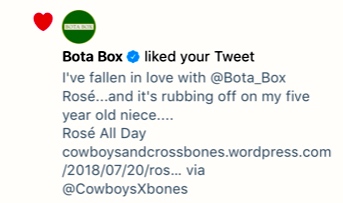 Yes. Yes I will be her Auntager.

I’m already waiting by the phone for the Bota Box people to call my people. As well as prepping a filing system.

Just practicing for my future.