At a recent bachelorette party, we wanted a little swig of wine before leaving (and to be honest, carry in our plastic cups during our walk) to the bar.  Being the oh-so-smart ladies we are, no one brought a wine opener for the bottles so we called down to the front desk. And after about 30 minutes (they apparently don’t keep them on hand…at a downtown Nashville hotel…WTF?), one arrived.  I thought my years of deep expertise uncorking bottle after bottle of vino would suffice and I offered to open the damn thing that we could hardly wait to get our tongues on.  But I was wrong. Way wrong.

Not a job for one…but two…

This cork would.not.budge. It seemed really crusty (if that is even possible for a cork) and we had the shittiest wine opener on the planet (the kind that makes a T at the top with a tiny spiral attached).

Coco’s leg power and my spaghetti arms were no match for this bitch.

If I had been wearing a skirt, I’d still have rug burns on my knees.

With all of the difficulties the two of us ladies were having, my gal pal G (you know, the one who yelled at the 80-year-old man) decided to bring her pull into this uncooperative wine bottle. 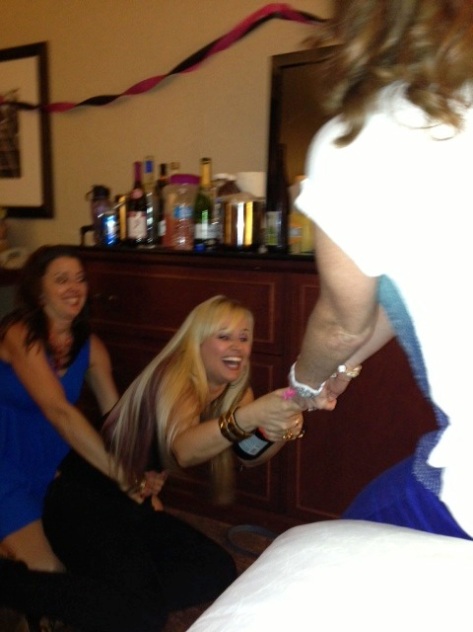 Realizing Coco was outnumbered by G and yours truly, LK entered the corking contest, pulling and tugging on the biceps of our resident redhead. 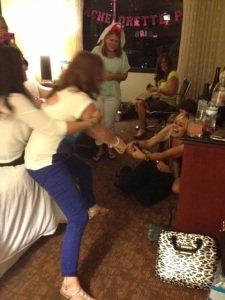 Eight arms outsmarted by one defiant jug of vino.

When it was all said and done (and I was thankfully not pulled apart into two pieces) this fucking cork refused to budge.

No luck but a great arm work out.

We then decided it would behoove us to push the cork down into the wine. And then it started disintegrating before our eyes, breaking in half and making me want to start bawling while kicking my arms and legs on the floor in true tantrum style. I WANT WINE DAMMIT!

All of that for half a cork still in the f’ing bottle.

Then Coco used what strength she had left in her arms to push the stupid piece of shit into the liquid we all needed so badly. SCORE!

Pieces of cork really add something special to a glass of pinot noir.

And that folks is how it takes four bitches to “open” a bottle of red wine.

I know, so classy. Expect anything else from this chick?

I didn’t think so.