Oh the woes of moving can seem like pure punishment.  But moving with a cat (especially my spoiled rotten fur ball) can seem like cruel and unusual torture. When I first told Ted of our forced impending move a few weeks back, he reacted about as well as I did.

I tried to coax and coddle as boxes were packed and piles were stacked to keep the cat from going whack. But unfortunately none of my tactics seemed to work…

Evil eyes from an empty drawer.

Sad face from an empty box. 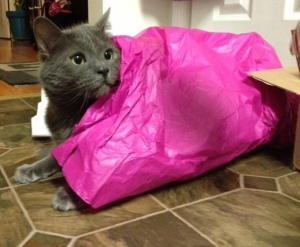 Unsuccessfully trying to pack himself beneath a blanket of tissue.

Drama King laying by his fried buddy from the movie Christmas Vacation.

Demanding a spot anywhere he could find.

Acting ferocious before one last cat nap on his favorite blanket.

And reminding me with one look how much he enjoyed his blanket being moved before him.

All of Ted’s shenanigans were making me want to pull my own nails out one by one so I decided to entice him the best way I knew how. Booze.

After calming The Bear down, I bundled him up and took him for a quick look at his new mini-manse. 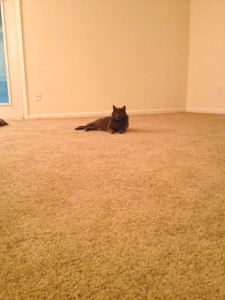 King of his new cat-stle. 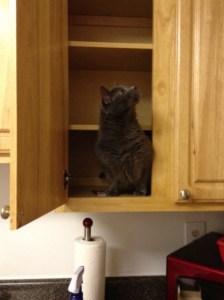 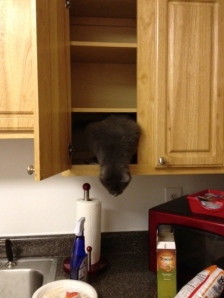 Wondering whether to make the oh-so-gigantic leap.

After marking his territory by rubbing his face on every nook and cranny, he seemed to be more at ease.  Even so, he was all nostalgic upon our last trip down the old driveway.

Last goodbyes to the birds, squirrels and chipmunks.

Theatrics at their finest.

Because relocating a pussy is nerve-wracking for all parties involved, I wanted to make TB’s first evening at his new palace as comfy as possible. Which is why I tried coaxing him into a happy place with sushi.

My tactics are slowly melting this icy feline.

And while we’re not snuggling in our new place like the good old days yet…. 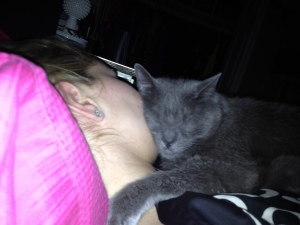 Ted’s having no trouble relaxing on his BFF blankie, making himself right at home.

This is the life.

While meowing the cry of his people every morning at 3am wondering where the F he is will hopefully diminish soon, I’m pulling out the big wooing dog tonight…tuna.

This will surely end the relocating-a-pussy-anguish, right?