You know when you have a gazillion chores to do around the house (which for me is unpacking about 56 more boxes in my new mini manse) and you’re finally in the mood to get everything accomplished in one (or so you think but really more like a consecutive 14) evening?  Last night I was in full organization mode, unpacking my cocktail glasses, finding a place for my liquor, vino and other spirits, cruising along quite speedily when the sky opened up and a crack of thunder (accompanied by lighting, followed by what seemed like a monsoon) clapped so loudly I about pissed my pants while Teddy cried out with a long, slow meow growl. And then, the entire place went dark.

My new residence is FAR from being settled.  And since I was trying to make some major headway, I had shit everywhere when the lights went out. Liquor bottles, a carton of cat litter, shot glasses, serving trays, toothpicks, vases, my beloved Skinny Pirate light, a fan, end tables, bag of cat food, tubs of picture frames, stacks of DVDs and mounds of throw rugs surrounded me on the floor in complete, pitch black, can’t see your hand in front of your face darkness. Oh F is the first thought that entered my mind as I stood still, hoping the electricity would pop back on moments later. And it did! For three seconds.

As I tried to maneuver my way off of the island of junk, my mind reverted to where my furniture was in my old place.  Walking straight into a wall (my toe still throbs), crashing into my kitchen table and breaking a nail trying to ‘feel’ my way to the drawer where I used to keep a flashlight in my old mini manse. That is still packed away. Among what seems like my millions of belongings. Shit.  I instantly gave up the search for battery-powered light and hunted for a lighter (that most certainly is unpacked, as I’ve used it but where the hell did I set it down?).

Twenty minutes and a long swig of wine later (while yesterday’s post makes me seem like an amateur in uncorking a bottle, I truly am a master. Truly! I opened not one – but two bottles of corked wine last night in the full on black with my mad skills. Impressive, I know. And don’t judge. I was bored!) I had two candles that I could locate glowing after finding the lighter on the floor behind the couch (well, my foot found it).

And then I did what all folks do in the forced dark. I ate all of my perishables in the refrigerator (which ended up not being such a fabulous idea but I didn’t want anything to go to waste!). I also sat on the couch willing the lights to turn back on. After about an hour of this, I did the only thing a girl could do. Take a bubble bath with a bottle of wine and a candle.

Suddenly, my “thunderstorms can suck it” attitude was a piss poor way of looking at the situation. A bath? Wine? Quiet? No unpacking? 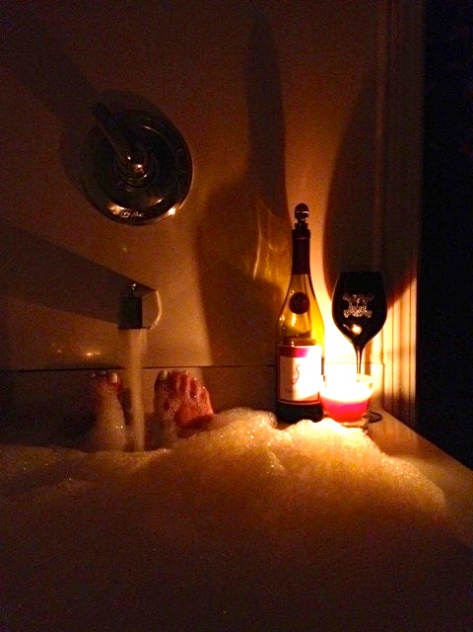 Rain, rain don’t go away! Come back so I can be lazy a few more days!

After I blissfully turned into a bathed prune, I took the wine and candle party outside to my deck, listening to the rain, screaming kids driving their parents (and me, of course) bananas out of sheer boredom, barking dogs scared of the thunder (why the hell wouldn’t you let man’s best friend in the house during a storm?) and an adult sibling dispute erupting in the apartment above me (fun to eavesdrop, just hope no one is ever thrown over the balcony).

And in the six (seemed like 6,000 with all of the commotion) seconds outside and the five hours of sitting in the dark, I remembered why having no electricity blows (not meant to be a pioneer gal, obviously).

We lost my aunt Marilyn yesterday, one day shy of her 85th birthday. Happy first heavenly birthday to you. 💖