Oh the thrill of a long holiday weekend.  So thrilling for me in fact that to kick start it off, I locked my keys in a house while picking Teddy up from his week long visit to his own personal Disneyland (he was such a nervous Nelly leading up to the move, he needed a vacay at a real house with a screened in porch while I opened and shut apartment doors 4,582 times and didn’t need to worry about the love of my life escaping or causing me a broken ankle while winding through my legs as I carried 32 pound boxes of books that I have yet to read). I thought for sure I’d put the keys into the ignition so I grabbed the kit cat and locked the front door knob. Oops.

While I seethed and sweat in the 95 degree heat with a gray fur ball on my lap, my mom had to make the 40 minute drive into rescue (which I’m sure seems never-ending these days) her daughter and grandkitty. 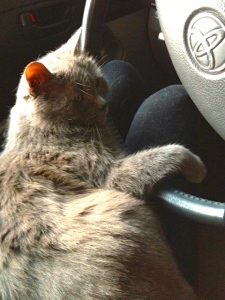 Teddy patiently waiting as I impatiently envisioned drinking a glass of vodka.

Once we located the keys inside the house (which had fallen behind a shelf and ate up the entire evening due to the quest for f’ing car keys) and made it home, Mr. Bear and I didn’t feel like doing anything except staring at all of our possessions that needed to find a home in our new mini-manse (click here to read about the epic fun of month long moving shenanigans).

Progress in this corner? Negative.

Happy little sparklers greeted my morning on the Fourth of July.

While my dad had his own pic to share…

The patriotic theme doubled as my mom entered the scene.

The celebration started with the mixing of raspberry vodka, regular vodka (but we HAD to have the fancy Fourth of July bottle – duh) a few ounces of Squirt Ruby Red grapefruit soda and a splash of Sprite Zero, garnished with blueberries and raspberries. A new version of a bomb pop. 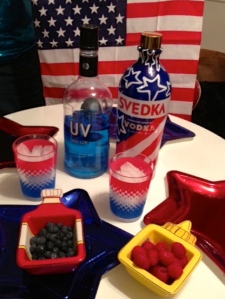 Booze. The most important part of a celebration.

While it did nothing but rain the entire holiday, we tried to keep Ted entertained by watching fireworks on TV (somehow doesn’t translate the same as in real life…).

The TV sparklers just didn’t cut it for Ted as he yawned (as did I) his way through the broadcast.

The Bear did perform his best imitation of a workout after the fireworks (he dramatically raises his leg when he commands a belly rub).

While Friday and Saturday did nothing but remain gloomy (which kept me indoors and unpacking) Sunday presented an invitation for lucky me to do some late morning relaxing on a pontoon boat . 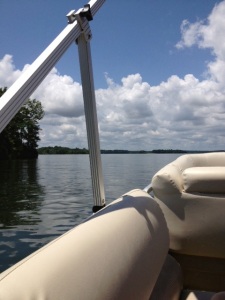 First time on the Redneck Riviera in Nashville!

With all intentions of getting my ass back and organizing my makeup, shoes, clothes, kitchen, bathroom, living room, hanging up photos, going through storage bins, etc….I decided to pour my energy into lounging by the newest perk of my recently upgraded mini-manse – the pool. 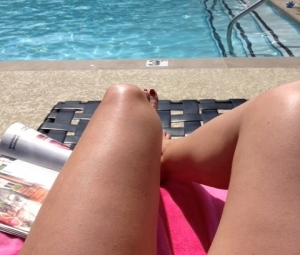 Of course all of the lingering in the sun worked my appetite into a frenzy.  So much so that I actually Christened my new kitchen by dirtying a few pots and pans.

And while my kitchen still looks like I haven’t done a thing yet since moving in a week ago, (truly I have but once the counter tops are cleared, some other treasure hidden in a box finds its new residency in the culinary center, so I get to touch my belongings again…and again…and again…there is no method to my madness) I was enticed to cook because in my new and improved castle, I HAVE A DISHWASHER!

It’s a miracle upon the mess! How did I live without a dishwasher for three years? The horror.

So as you enjoy the start to a fabulous week, I will be driving my neighbors crazy running my dishwasher over and over.

It takes so much to thrill a classy gal like me.