So, many of you know (because I won’t stop being a bawl baby and feel the need to post every other day about this matter – oh woe is me) my furry feline Ted and I have been asked to leave our little mini-manse due to the owner’s son needing my side for his expanding family. I took a minute to digest the news before passing the information along to an “I hate change more than anything in the history of the universe” cat.

When I first told Teddy we were relocating, he gave me his best cartoon eyes popping out of head routine.

Then he got all weepy… 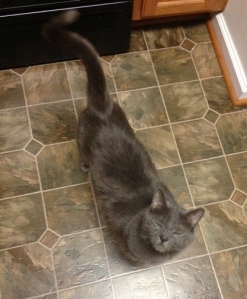 I think Mr. Bear thought if he gave me his sad face long enough it would change our situation.  No such luck.

Realizing his fake tears weren’t working, he ran for the nearest open space (that he has never, ever been interested in before).

While trying to coax TB out of his hiding space, he tried to escape his pain by delving deeper into the interior of my cabinets. 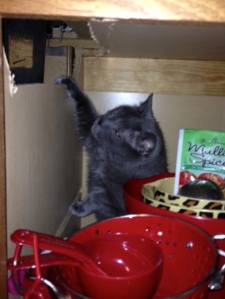 Why can’t he just stuff his face when upset like the rest of us? DRAMA.

So after begging and pleading with him, he emerged from his hideout. 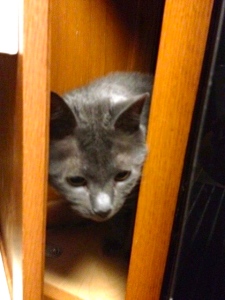 Beg me and I will come.

Silly me, thinking this moving nonsense was water under the bridge, I turned my back for one second (CATS!) and Teddy had moved on to bigger and better out-of-reach places. 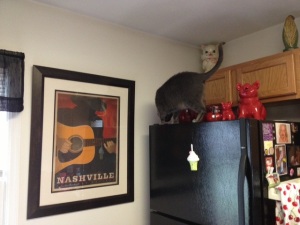 Sternly telling him to get down and take his eye balls off of my antique decanters, he suddenly lost the ability to hear.

Yep. He went there.

I reluctantly resisted the urge to scream “GET THE F DOWN” at the top of my lungs as he walked the top of my cabinets like a tightroping Vegas act.

Making my heart race with the little flicks of his tail. Bitch!

Reaching the end of his circus act, he realized there was nowhere to go, nowhere to hide so he turned around and gave me 30 more seconds of quiet terror as he sauntered back to his starting point. 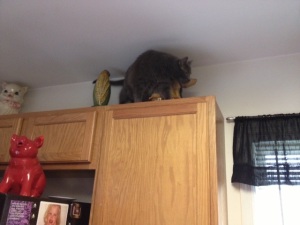 Then Mr. Bear got all dramatic and tried ramming his head through the kitchen wall.

Realizing this attempt at drama hurt him more than it did me, he just sat and burned two tiny holes into my soul with his gaze of hell. 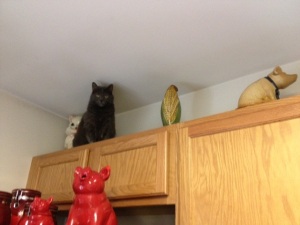 This pussy is pissed.

And then, he proceeded to cry, whine, bitch and moan for about a half an hour until I got up on a chair and replanted him to lower ground.

This upcoming weekend of moving is going to be such fun…I may single handedly drink the world dry of Captain Morgan.

Whether or not you come forward, you are fearless.