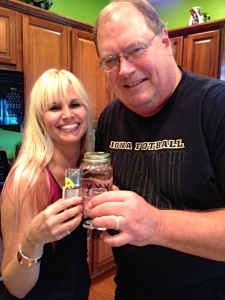 Being from such a classy clan, we started a tradition a few years ago to celebrate every touchdown or field goal that our favorite college football team, the Iowa Hawkeyes, score with a shot of one’s choice (this way no matter what the outcome of the game, you can have fun – even if your team sucks (which is how this lovely tradition began). Unless they score nothing of course, and if that’s the case, get a new team).

This past weekend, my dad really upped ante (and kept it Southern) by blowing the dust off of a jar of moonshine for our required celebratory shots. 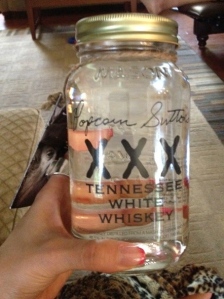 In order to prep for a trashtacular toast (and be sure you’re ready for a photo-op), you must first be sure your three free fingers that aren’t holding the shot glass are available for a partial jazz hand. 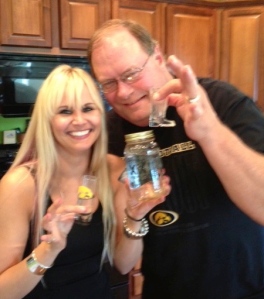 Second, make sure your ‘do is did. Right before this pic was snapped, my dad said, “I hope I combed my hair.”

Either way, it was too late as the toast was already in motion. 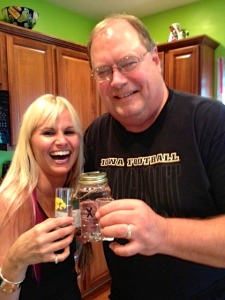 What hair? The one strand on top of your head?

Next, be sure you prolong the inevitable by clinking your glasses several times. 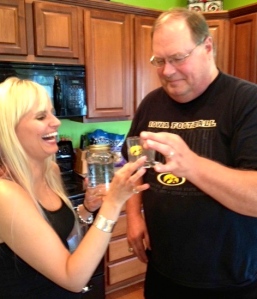 Then before you take the shot, say something really clever like my dad, who said, “You know, once you go moonshine you never……….”

Feel free to borrow this toast whenever you shoot moonshine next. 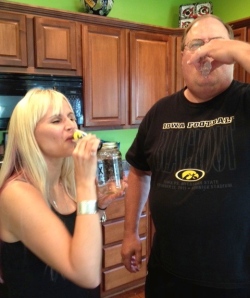 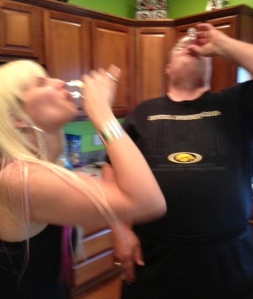 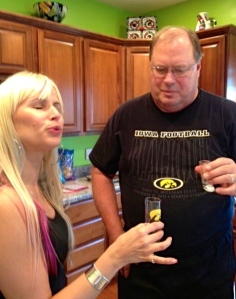 Smooth. But hopefully the Hawks don’t score again until the second half.

Never one to be at a loss for words (unless he’s conducting a toast), my dad concluded our initial shot by saying, “Best shine I ever had.”

My response followed, “Oh no shit, Dad. It’s the first time you’ve ever had moonshine,” (although Popcorn Sutton is awfully tasty – it also mixes well with lemonade or Diet Coke for you white whiskey connoisseurs that aren’t down with our family tradition of straight shooting).

While we were hemming and hawing over the “best shine ever,” the Hawkeyes scored again. 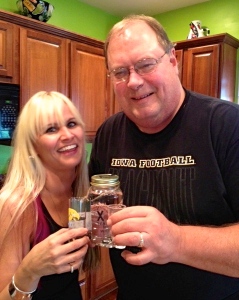 So even if your team loses (like ours did in the last ten seconds), you can have some bright, shiny fun watching the game anyway with a little bit of Southern likker.