One of the perks of Rapegate is I’ve gained a superhero named Sheila that I see every Thursday. As a matter of fact, Thursdays are now just referred to as Sheila Day in my world. She’s been my therapist since the saga of this soap opera turned shit show of my life began January 29, 2016.

The non-perks of Rapegate have been the PTSD, severe stress, adjustment disorder, insomnia and borderline clinical depression. BUT this gal is keeping me in check weekly and slowly putting my broken ass back together. 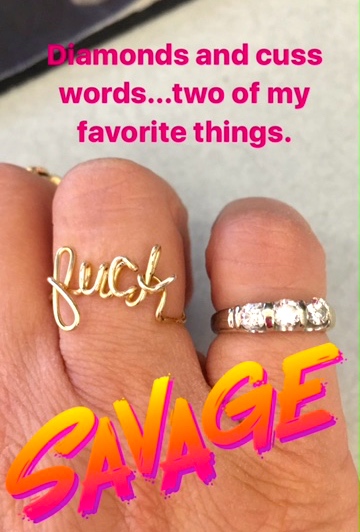 Watches from Gma and Aunt Crazy Pants keep me company every Sheila Day.

And I love that my friends take notice, in keeping up with my struggles.

Thanks DC. I heart you.

I always leave Sheila a little more than shredded emotionally, mentally and sometimes even physically (examples: throwing up in my car after a particularly brutal session, stomach aches that cause me to shit my pants and in the rare case, full on panic attacks). PTSD is a real fucking humdinger. Thank you Rapist.

Some times I need complete alone time to cry in my closet after Sheila Day. Other times, I need companionship that First Mate was happy to supply last night.

One thing that always happens after therapy is the inability to get an appropriate night’s beauty sleep. 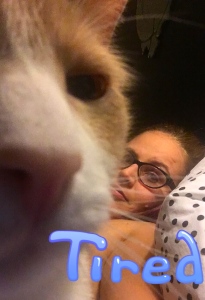 Naturally, I wake up more beautiful and less aged than the night before.

Due to the lack of seeing the inside of my eyelids for more than two hours requires copious amounts of coffee that I loathe all hours of the day. Then, my emotional hangover for the weekend kicks in. 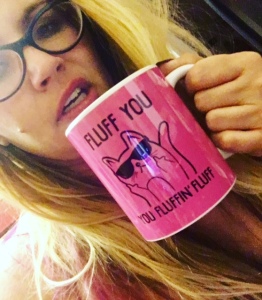 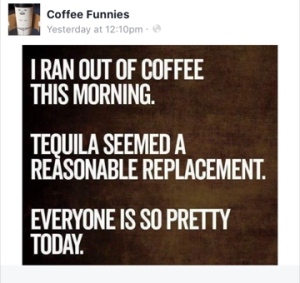 But it’s nothing the pink stuff can’t cure. 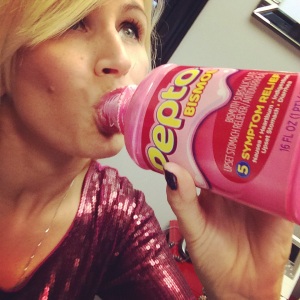 Shots straight from the bottle.

So, as my leg is bouncing to the ceiling here in Nashville today, you can bet your ass I’ll be doing a little relaxing later on.

Here’s hoping your FriYAYs are more fun than mine. Throw back an extra Skinny Pirate for me, pretty please.

Is the weekend ever here fast enough?

Not for this duo who couldn’t wait long enough for me to take a piss before expressing their delight in having their mother smother them for two whole days.

We spent Friday lounging around the mini while I guzzled wine like Kristen Wiig in an SNL skit.

Sunny Saturdays in Nashville call for pool parties. Since I don’t do beer and sipping on Skinny Pirates all day can make for an early evening, I’ve discovered spiked seltzer water. It’s the shit – 4.5% alcohol, 90 calories per can and 0 sugars.

After an all day sunfest, our pool crew decided to hit up my fave watering hole, Dalts for the aforementioned Skinny Pirates and home cooked food.

You see, we chose Dalts for our after hours pool party because last weekend, we ran into a bit of trouble at another local bar. After several rounds of cocktails and bar snacks, I got up to sing one of my fave AC/DC songs with the band. Complete with a greasy bun, prescription sunglasses on at night (’cause I’m douchy like that – oh, and also sunglasses hide sins, requiring no makeup after a pool day) and a maxi dress.

After my non-Grammy winning performance, on the way back to our table, some guy at the bar smacked my ass so hard my bun fell out. Some guy who I hadn’t spoken to all night. Some guy who I hadn’t ever laid eyes on before. A stranger. Trying to get some semblance of dignity back after the unwanted, unmerited slap of a stranger, I made my way back to our table. Just in time to find Cat Boy in the dude’s face, defending my honor…and thankfully so. Who knows what I may have done once I garnered my wits?

Girls just having some fun.

We were immediately asked to leave the bar and I inquired whether or not both parties were being asked to leave. I was told yes and I must say that I understood why – alcohol combined with angry tempers don’t mix but not one person – not the ass hat who slapped me, not the bouncer, not the employee who asked me to leave a very busy bar acknowledged what had happened. And as we stood outside waiting on our Lyft, we witnessed the stranger who smacked me being served another round of drinks with his buddies. 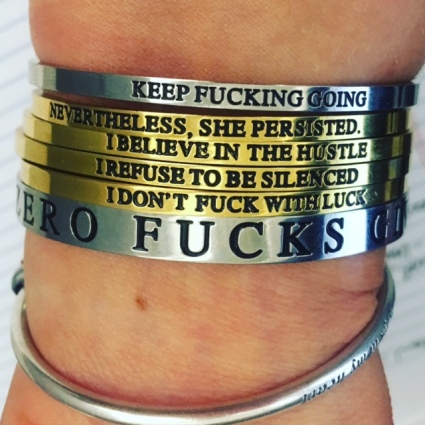 This kind of shit isn’t OK. It bothered me all week and so after a few days, I called the owner of the bar who went back, looked at the tape and called back to apologize. He also said that as an owner of this establishment of 13 years, he’d never had any issues brought to his attention like this and wondered out loud how many other times something of this nature happened. Which is so fucking true.

If you see something, say something.

Violence isn’t the answer but fuck. There is never an appropriate time to spank a grown woman – a stranger to you – like she just hit a home run in the 9th inning of the World Series. Hands off.

Luckily for me, these two were just happy to be scarfing down on celery and pizza and I got picture proof of it.

Are your diners this cute?

Princess B got a new leotard and hates it. Obvies.

Hot shit and she knows it.

You know who else is hot shit? Former Iowa Hawkeye, Karl Klug, who has played for the Tennessee Titans since 2011. As Dada CBXB says “Klug is what hard work and not great talent is all about.” Does he sound like a former football player and coach? It’s been beyond fun having a defensive end on our professional team to cheer on every Sunday (after our college football Saturday fun). Klug signed autographs after practice last weekend and my friend’s boys were lucky enough to get a little pep talk, as well as an autograph.

You know what else can’t get here fast enough? Tourists leaving Nashville. Us locals can’t even go downtown anymore without fighting asses to elbows…I mean, I’m sure Robert’s Western World is wondering where in the hell the folks who come and sit in he front row for 10 hours have been. Although the Music City has grown so much in the past five years, we may have to get there at 10am just to see our fave band come on at 10pm.

Winding down the weekend, there was a packed couch.

The gray duo on one side of the couch.

Balanced by the human sized Rocky on the other.

Somehow, some way we made it to our usual wind down spots, naturally.

Here’s hoping you have an ass slappin’ fabulous week – for all of the right reasons.