Dreary skies didn’t keep the fun out of the Fourth of July holiday weekend in Nashville.  The crew and I were going to have a fabulous time – even if we had to enlist in the party patrol. 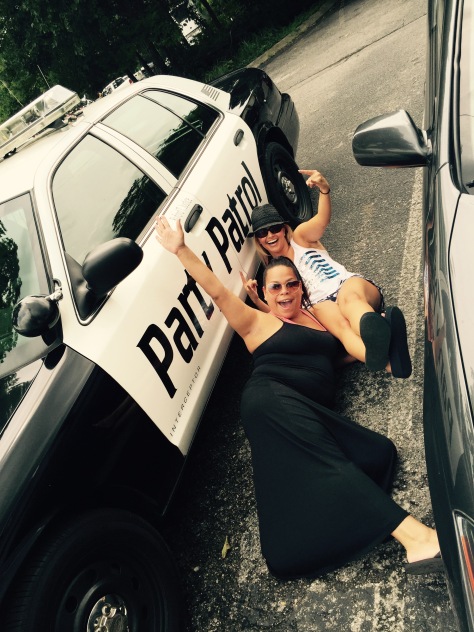 Not everyone was in the spirit of celebrating. Prince B wasn’t sure what to think of his new headpiece as he paraded around his kitchen in Iowa.

While the real life sculpture was sulky, there was zero hesitation on my part whether or not to fete the weekend – no matter how shitty the weather. It was still hot enough for a boat ride accompanied with a bag of wine for classy, cooling off shenanigans. 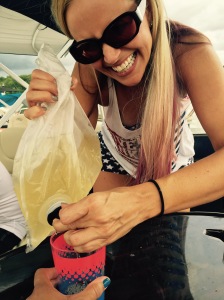 This can also be used as a pillow if a party goer needs to pass out.

Between the over consumption of vino and the precarious monsoon-like weather, I kept refreshed in the lovely I-don’t-care-why-it’s-brown-because-I’ve-had-too-much-to-drink colored lake.

Cocktails helped keep my composure in the non-crystal clear lake.

Princess B had a much better (smarter, cleaner, safer) way of keeping her body temp in check by slurping on a slice of watermelon.

Not to be outdone by my niece, I threw on a matching outfit but sipped on something a bit more my speed.

Bringing the best out for a holiday.

Dada CBXB double fisted to stars and stripes forever as he downed a very American meal of … chips and salsa.

Meanwhile I was policing my two pussies as they tried to create their own fireworks all weekend by demanding to drink out of the same dish at the same time, acting as if they had their sights set on the last nine ounces of water left on the planet.

Here’s hoping you find your own way to keep the blistery summer heat at bay.