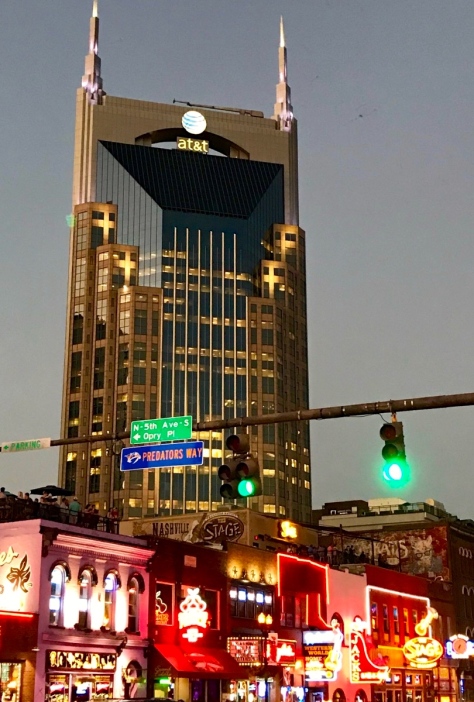 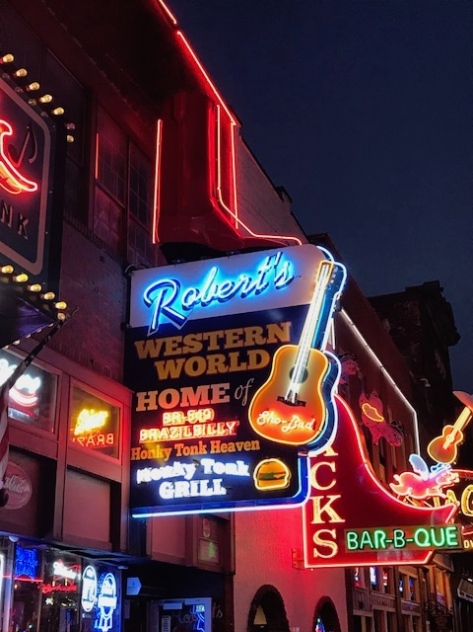 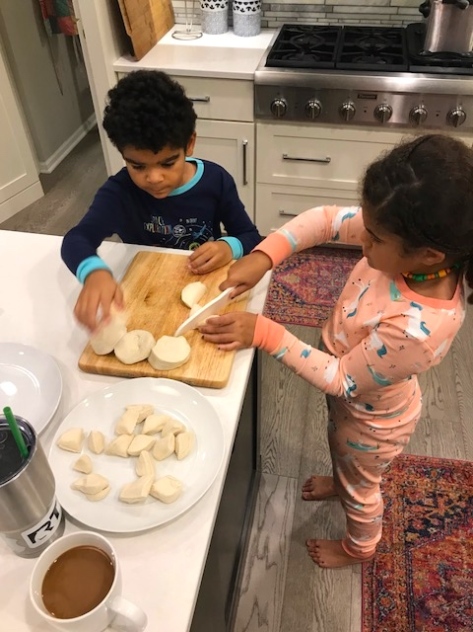 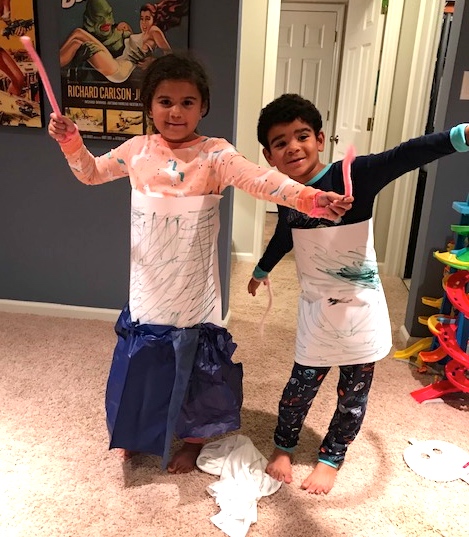 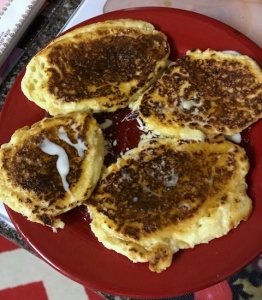 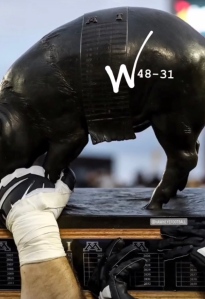 Due to the current football season underway, we were encouraged to decorate our work spaces with items showing off our #1 team last week. Per usual, I went with subtlety.

Just me, over here in my Hawkeye sequins jersey. 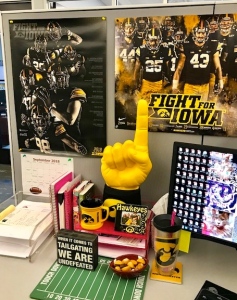 I hate the Iowa Hawkeyes, obvies.

See, I have a thing for mascots. You know, those fur coated creatures that accompany my fave sports teams. It sure as shit was my lucky day.

In waltzed T-Rac. My face went red, I screamed like a girl seeing The Beatles on the 1964 Ed fucking Sullivan show, and about broke my metal folding chair pumping up and down on my plump rump. With my heart racing, the cheerleaders started drawing names for raffle winners. T-Rac was the one distributing the awards and I had to get my hands on him. The final prize of the day – a $100 gift card and commemorative Titans glass was on the line. The blonde beauty drew that last ticket and….said MY NAME.

I reacted with real class.

I jumped like a fat rabbit up to get my prize while giddily giggle screaming the entire way.

In the span of 25 seconds, I managed to make a gigantic ass hat of myself in front of my entire office. I also managed to not only maul T-Rac but told him that I loved him AND announced that this was the best day of my life. It wasn’t even noon on a Friday yet.

Afterward, the gentlemanly raccoon and his cheering sidekicks stayed to graciously take pics with the peeps. 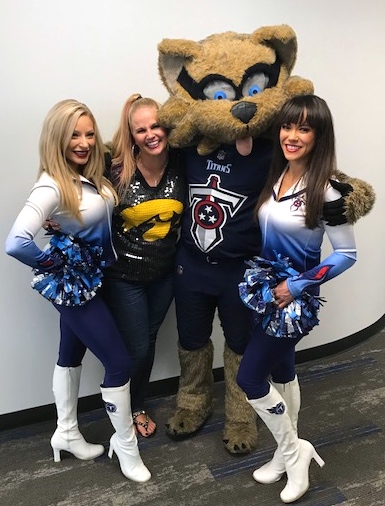 I  asked the hot mammas to please move over and allow me a solo photo with my main plush squeeze. 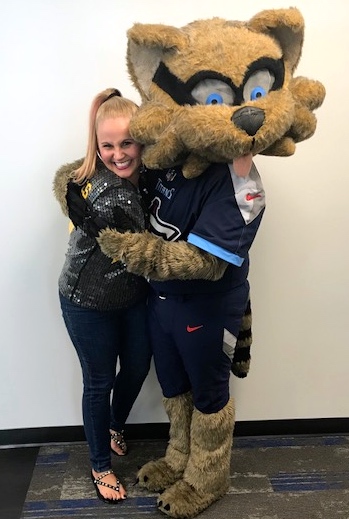 Move over bitches. He’s all mine.

On top of being in the arms of a giant stuffed animal, my life was absolutely complete when I made my debut on T-Rac’s social media page as the inaugural “Fan of the day”.  Of course I turned right around and added it to my Instagram. 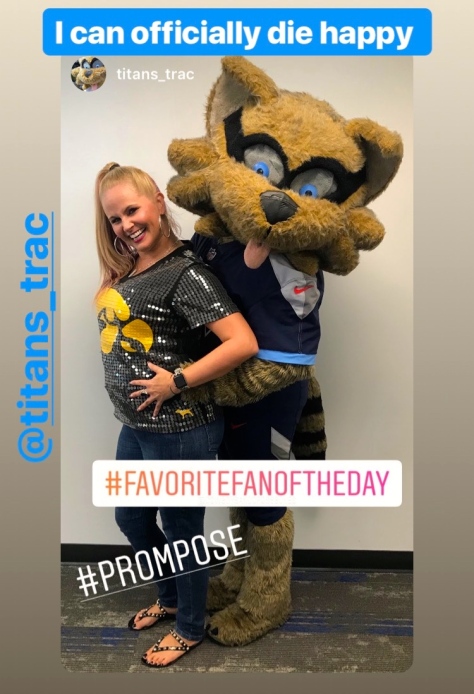 Stand by for our “Save the Date” wedding invites.

How could this day get any more exciting?

An email went out announcing free cans of wine in the breakroom. I had to steady myself as I sprinted down the hallway to hoard the loot.

Mine all mine – now safely in my fridge and damn good.

My adrenaline was pumping pretty high, so I was excited I had plans to celebrate one of my nearest and dearest gal pal’s birthday after work. 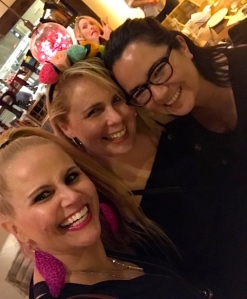 I could hardly go to sleep since I had such a positive karma filled day. Luckily, Ruby Sue was wide-eyed with me.

Too excited to sleep.

With it being a balmy 90 degrees on Saturday, I hauled ass to the pool, trying to make summer last.

While I was hoping Saturday wasn’t the last hurrah in the sun, my Iowa twins were up and at ’em with a clever activity. They put coins in pans to freeze overnight. 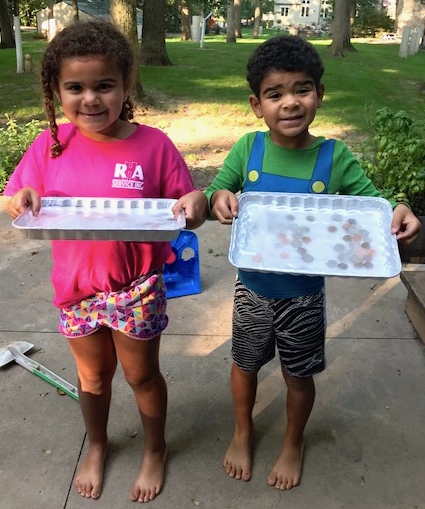 They had to break the ice open, count the coins and exchange them for dollar bills from their parents.

Big money for Prince B.

Princess B headed straight to the Dollar Tree.

Saturday night my Hawkeyes played and I headed out to Dada CBXB’s to get the tailgate going. 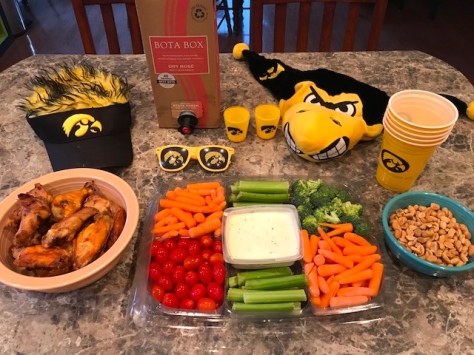 The kitty didn’t stay cozy for long, as Iowa scored five touchdowns. You know what that means…

Easily soaked up the next morning by my omelette making father. 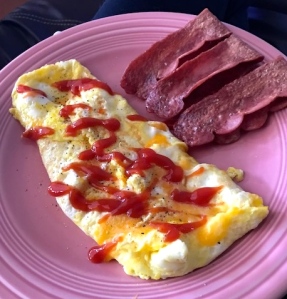 Being back in the maniac celebrate-everything-for-fun-life mode again, I started decorating for Halloween all day Sunday. My fabulous Fabio could have given two shits about my hard work, turning the mini manse into a haunted fortress. 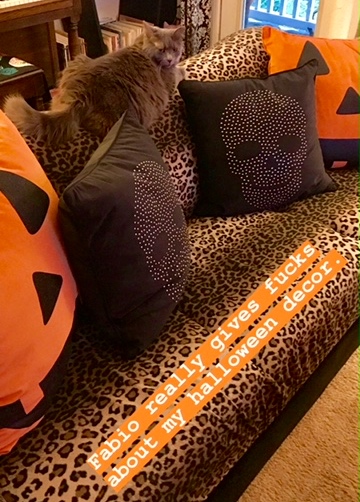 As I was going back and forth to fetch my Halloween bins from my car, it was raining lightly. When I looked up in the sky, there was a full on rainbow. I seriously considered getting in my rust bucket and searching for the end, hoping for a pot of gold. 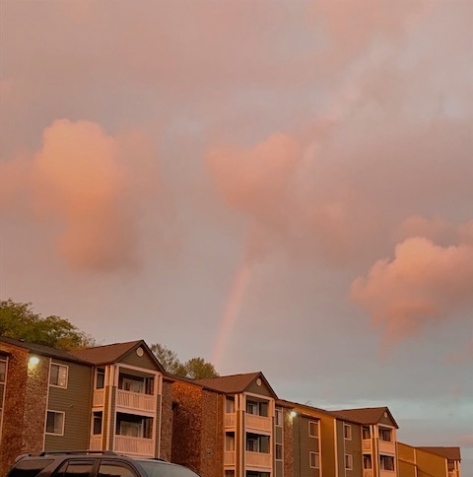 I mean, I had fab karma going on.

Instead of looking for lost treasure, I plopped down in my tub for a soak and a People magazine read (side note – I get Meghan Markle is now a princess from America and all but if I wanted to read about the Royals every week, I’d move to fucking England).

Then it was time for a snuggle down on the leopard couch with my new fall scented candles. 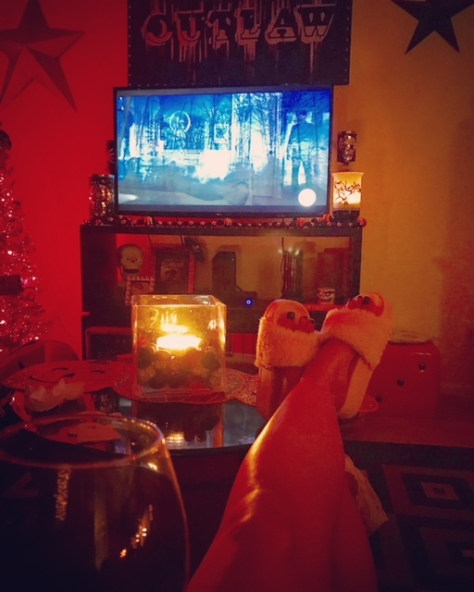 No better way to wind down after an exhaustingly excitement filled 48 hours. Amiright?

Here’s hoping your mascot equivalent finds you this week.