Oh the joys of being a cat mom! Parties aren’t just for folks who have human children (yawn) – us crazy cat ladies can find just about any reason to celebrate our love of pussy.

This May marks the fifth year Teddy B. and I have been in a relationship (I’m not going to lie, it took a little coaxing early on to persuade him to have his world revolve around yours truly but now he can hardly breathe without glancing my way for permission – oh wait that’s the other way around. I look to him for direction – I forgot I was talking about a cat there for a second) and why not acknowledge our happiness together?

First one must have a theme for a pussy party and I thought since we were celebrating our fifth anniversary, why not call it Cinco de Teddy?

Doesn’t he wear a sombrero well?!

You then must decide on party attire for you and the guest of honor.  I played along with the theme by wearing a T-shirt that captured what everyone in attendance was thinking…

Accompanying the darling shirt was a pair of leopard print jeans – I know, fitting right?

You can call me crazy but at least I’ll look cute…I think.

My kit cat’s giddy up was a perfect match for Cinco de Teddy – complete with a sombrero and poncho.

As you can imagine, Ted could hardly wait to put this on.

To get your pussy pumped up, decor is a must for the party and I included balloons in this category.  Excitement coarsed through TB’s bod as he tried to claw a balloon open to suck on helium (he’s such a little party animal).

Wondering if the balloon would hold him in midair…

Once I thwarted the helium heist, I showed Ted the other party elements like his serving bowls – which to his delight held three times the amount of food he’s normally allotted (while already a ‘big boned’ cat it was his party, so he deserved the extra helpings, yes?).

Other decor should include snaps of you and your pussy’s life together.  Grandma CBXB has a Teddy Bear Meow scrapbook she keeps in her classroom (see, I’m not the only crazy in the family – she proudly displays the love of her grandpet daily…ahhhh!), which I accompanied with our most recent Christmas card and a gift from our fabulous blogging friend, The Buxom Gourmand. 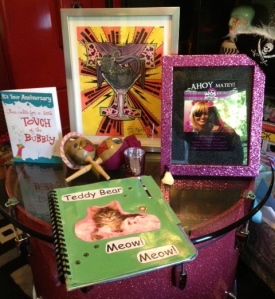 Look at this painting that my ultra talented gal pal from The Buxom Gourmand crafted for Teddy! How much more puurfect could this be?! We are proudly displaying our new favorite artwork in our mini manse. We love and thank you, Bronwin!

It’s important to capture the calm before the storm (in this case, shoving a cat into a poncho and sombrero), so be sure to snap a pic prior to the start of the party.

If he only knew what was coming…

Before traumatizing Ted with his party attire, I let him sniff around the treat table…

Sometimes dressing a pussy can take some liquid courage, so I worked on mine outside while Ted explored the party fun inside.

I think he might hate me…but oh well! Gimme another Skinny Pirate, please!

I’m thinking of all of the paybacks coming my way…

And yet I keep the photo shoot going… 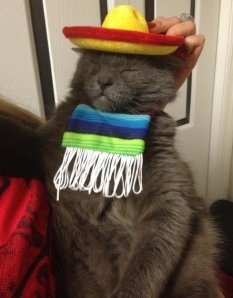 Until Teddy was so embarrassed he pretended it was siesta time.

In order to perk your pissy pussy back into a party mood, get out the sweets! 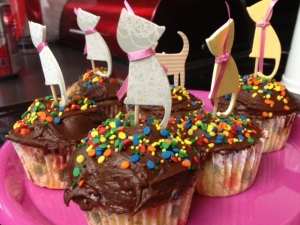 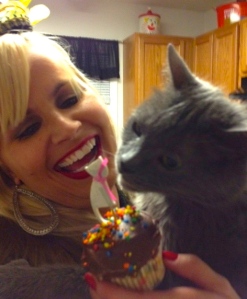 Feels so good when it hits the lips (or whiskers in Ted’s case).

Enticing your feline with cat cupcakes will make all of the clothing cares disappear… (yeah, right. I will be punished for the next five years over this party).

Be careful after all the sugar rush because you’re sure to have party poopers crash after consuming.

One cupcake and it’s couch time?!

Teddy was so exhausted from all of that licking, he had to pass out with his back to party goers.

I suggest you heckle your pussy back into the party spirit if you catch them napping.

If that doesn’t work, mocking the sleeping beauty will totally do the trick.

It’s exhausting being the life of the party.

The combination of heckling and mockery will make the silently sleeping cat love you more than life itself.

As the party is winding down, you’ll find it hard to keep the party attire off of your pussy. 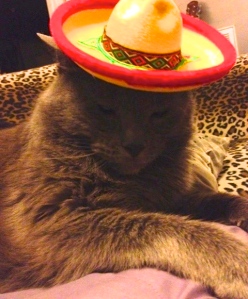 And that folks is how you throw a party for your pussy (or dog, bird, rat, snake, ferret, rabbit, snail, fish, etc…)