Being that I haven’t been in a celebratory mood for the past two years, retrieving my Halloween decor out of Camo’s attic was an exciting feat. Getting my giddy up back after Rapegate, I’m trying to stay on the right track by doing what I would “normally” do, which is celebrate the fuck out of every. single. thing. I can.

So Halloween has been my first glittery stiletto heeled step in the thriving direction. And what better way to get my ass in gear than to host my monthly Supper Club in October? 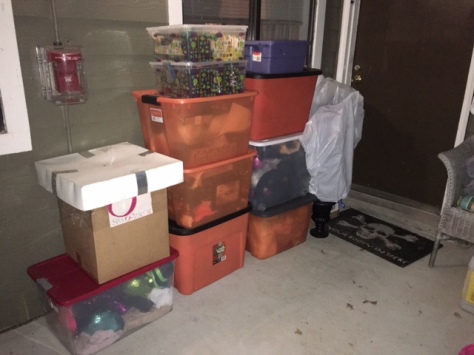 Yeah…all for the mini manse.

As soon as the bins were in, I was in shopping heaven – being that I hadn’t seen my sparkly Halloween accessories in almost 700 days. I perused my own decor, acting like I was on an episode of a holiday themed Supermarket Sweeps.

This was also the first time any of my current fur ball amigos had seen any type of Halloween madness from their mama, and it was super fun trying to avoid stepping on a live cat bomb, as they hid amongst everything.

Elsa Pants trying her hand as a ground hog.

As the count down began, I decorated like the Wicked Witch of Nashville, readying my mini manse for a Ghoul’s Night In.

Why would it be worth even putting one decoration out, if you didn’t dress up the outside of your haunted house? Even the Glamingo slipped into her skeleton feather attire.

While most mansions have extravagantly large foyers, mine is excruciatingly small – but grand nonetheless. 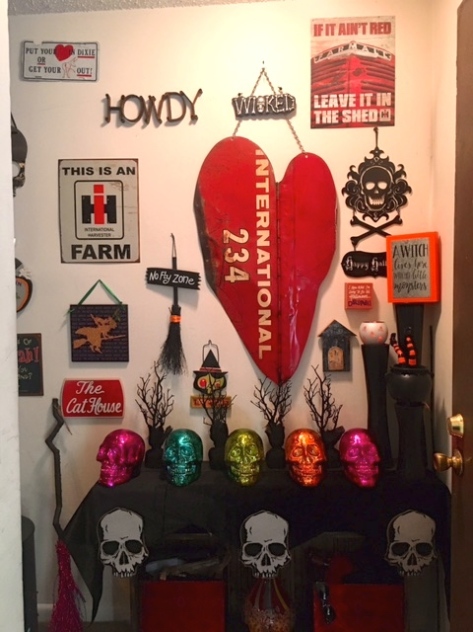 Instead using my dining room for what its intended, I naturally have a few bars (duh).

The bar cart gussy up.

The liquor bar gussy up.

The side bar gussy up. 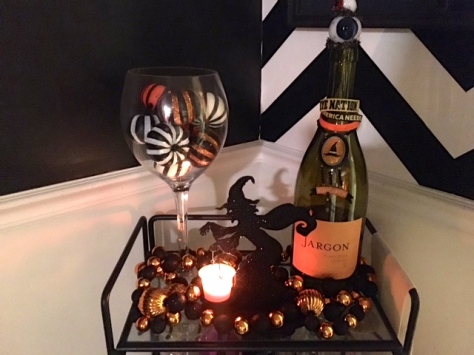 The wine bar gussy up.

The fur ball bar gussy up.

No, I do not think I have too many bars. No, I also do not need to attend weekly meetings (*cue eye roll*).

In lieu of dishes in kitchen cabinets, I chose to display Halloween knick knacks galore because…really, dishes are boring.

The stove top was easy to cover because it’s so rarely used. 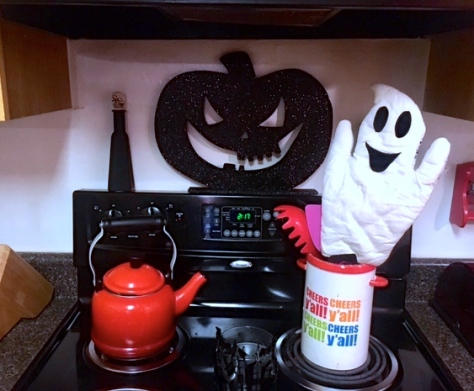 My piece de resistance happens to be my player piano, which I turned into a haunted forest of sorts where resident pussies often tip toe through like abominable snowmen, seeing what all can be knocked over. Or broken. Or played with to pieces.

Speaking of my pussies, of course their room is also decorated – or else they’d be pissed.

After my mini manse was haunted to the gills, it was time to prep for the ghouls. 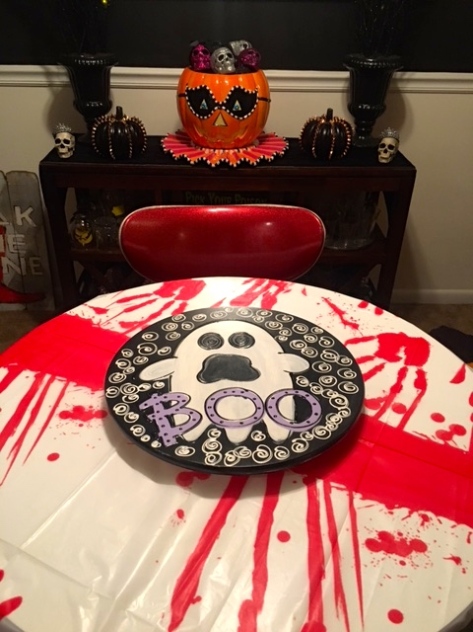 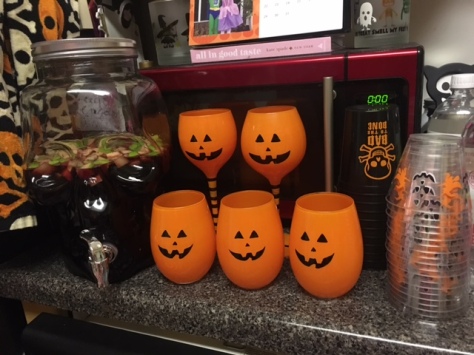 My finest china ready for chili and potato soup.

All that was left were the ghouls who came to par-tay as my fave non-scary Halloween movie, Practical Magic, played in the background.

Don’t think I let them forget me.

I mean, I am the ghostess with the mostess. 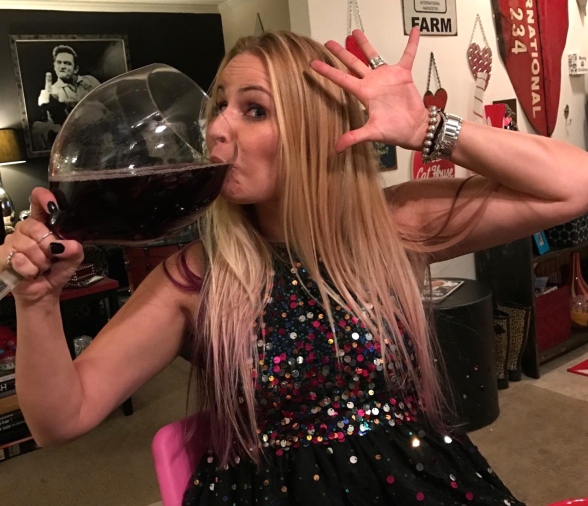 Anything better than a fun old-fashioned slumber party? 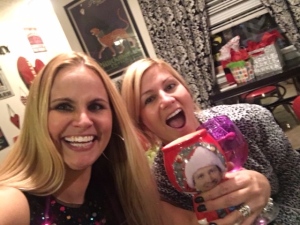 I had three gal pals over to the mini manse in order to jump start my holiday spirit slump – and boy did it do some good for yours truly.

Sparkles, Umbros and wine for four.

Not too long after one box of wine, we couldn’t figure out how to open the second… 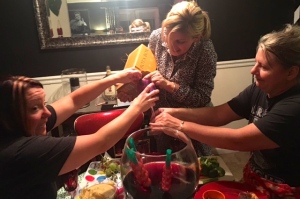 Um, it doesn’t even have a cork.

So I thought it was the best time to bring out my homemade sangria, Pirate’s Punch, which consists of Fireball, Captain Morgan and red wine. 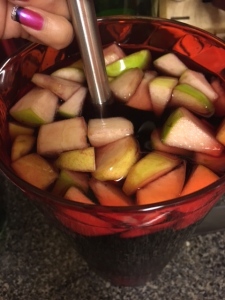 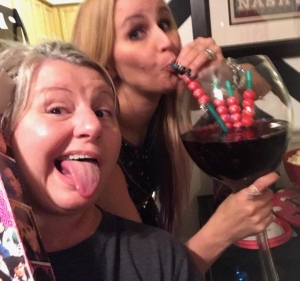 I made her drink it anyhow.

Typically a true party animal seeking to be the center of attention at all times, I knew my Tedstar was feeling low when I had to force him to take a selfie.

Stuffy host due to kitty sniffles.

When it was time for the ladies to sleigh bell it to slumber in their own beds, I gave away pussies as parting gifts.

Saturday morning I was hoping to treat myself to brunch with sat-out-all-night-snacks but who wants room temperature carrots as hangover food? 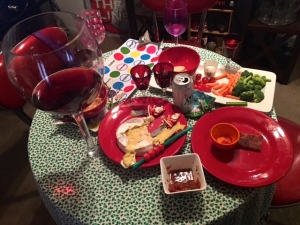 No breakfast for me.

While I was perusing an empty fridge, my Iowa twins were basking in the first snowfall of the year.

A few inches to start the season.

Being that they are almost four, this duo isn’t looking forward to the holidays, presents or Santa.

Not excited for Christmas. At all.

I for sure wasn’t excited to take Ted to the vet – worried that his sniffles may signify a worse problem than the common cat cold.

Getting the cold shoulder.

At the risk of sounding like an even bat shit crazier cat lady than I already am, I found TB’s little stuffed up nose and snot bubbles kinda cute.

Not at ALL amused having to breathe through his mouth.

I knew I was in for it on the way home after the vet because not only did he get shots of antibiotics but they also took blood as well, which is something that never thrills Ted E. Bear.

Trouble in paradise for CBXB.

Dropping my pissy pussy off to pout the day away, I headed to my fave watering hole Dalts for a little happy hair of the dog.

Taking the edge off.

I was only in the restaurant about 12 minutes before I inhaled a cheeseburger that I couldn’t eat fast enough but wanted to make last the entire day. 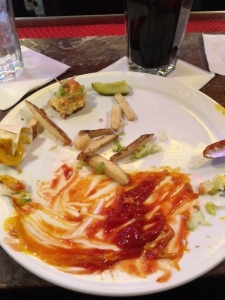 There was a burger here. I swear.

Heading home Saturday night to watch college football conference games, I was reminded where I was a year prior. The Big Ten Championship game in Indianapolis with Camo, The Silent Indian and Dada CBXB, cheering on my beloved Hawkeyes (who have had a less than stellar 2016 season BUT made it to the Outback Bowl – I’ll take it).

Two Hawkeyes, a Spartan and a Volunteer.

Funny thing is, although Iowa lost in the last two seconds of the game, it was still one of the best days of my life. As I prepped to watch Wisconsin play Penn State, I couldn’t help but connect with this sign during Game Day. 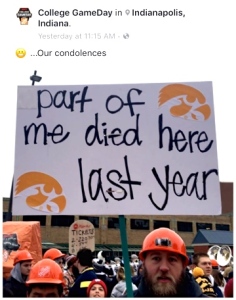 Sunday snuggles meant that somebody was starting to feel back to his old self. 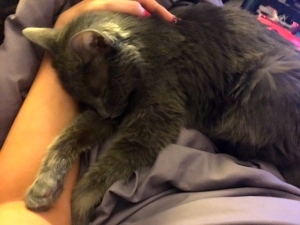 After a day of rest and relaxation, the work week has started off guns blazing. Which is why I may or may not have Pirate’s Punch in my mug…

Here’s hoping there’s more snuggles than sniffles in your week. 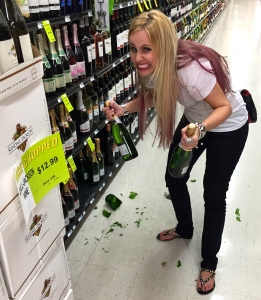