Stop. Or I’ll shoot (in your general direction).

It’s possible that I may not hit you. The bullet might nick your ear or rustle the hair on the side of your head and that’s OK…I just really want to scare the living shit out of you (well not you, actually).

My real live stuffed animal Ted and were living happily together in our old mini manse.  So when someone started messing around with my surroundings I wasn’t so much scared as I was territorial. And extremely pissed off.

Little mysterious happenstances occurred…it wasn’t that someone was harassing me outright but just enough to make me take notice (inside window locks broken, as if someone was trying to jimmy them open), enough to let me know they were around (a pile of cigarette butts by my car door in the morning that weren’t there the night before – and I’m not a smoker) enough to piss me off (smashed Halloween pumpkins on my sidewalk – and I lived around the rear of the building, so I knew someone was intentionally F’ing with me), enough to get some sort of security…enough to get my ass a gun.

OK, so maybe my .38 special revolver is a teeny tiny bit smaller than the ‘friend’ Al Pacino used in “Scarface.”

Upon acquiring a loaded firearm, I was feeling much more secure. So while I felt at ease, I had never shot a gun. Not even a bb gun (I couldn’t even make cool gun sounds – a capability all boys seem to be born with – when I was a kid).  And I thought maybe it would be a good idea to know how to handle the gun so as not to accidentally point and shoot at shadows, possibly hitting myself in my foot (which would be tragic, as I love my heels).

Sharing my need to obtain skills, my buddy found a ‘ladies shoot free’ day at a gun range near work.  So over lunch (only in the South would you be able to shoot guns over your lunch hour…how red neck of me…but let’s not forget I’m already fabulously trashy (see anything in my Grizzie category) therefore, I don’t give a rat’s ass what you think) we headed to the fancy gun range.

We arrived to a grimy, dingy, seedy (get the picture?) building, complete with bars on the windows.  After signing in, we received our ear (which look just like fancy headphones but sucked because they were communal. Yuck) and eye (snazzy yellow-tinted glasses) protection and headed downstairs.

Prior to actually shooting a gun, I was feeling very bad ass. Like a big, dorky, bad ass with kick ass accessories.

Did you get that last shot? Do I look cool? Seriously, tell me.

The first few times I pulled the trigger I was startled not only due to the loudness of a shot but also due to the ricocheting casings that flew off the ceiling, coming back to bite me on the head (insert screams – as at first I thought they were bullets – how blonde of me).

Focused on trying to hit the target…anywhere.

My trigger finger is apparently the weakest link on my body (why the hell does this look so easy on TV shows?) because I was having to use two digits after about five shots (insert my excuses as to why my bullets were hitting the floor and ceiling instead of the target). 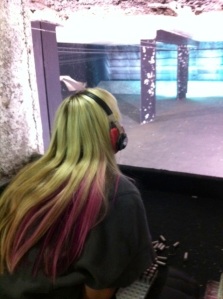 Did I really hit it? Or is that just a black spec?

Hells yes I hit it! And then almost shot my gunpanion in all of my excitement.

While taking a break from my cockiness of less than mediocre shooting ability, (and resting my throbbing hand and aching finger) I was able to pose for one more threatening picture –

Stop! Or I’ll shoot…if I don’t giggle you to death first (way too much red neck fun at the gun range…maybe I do have a little Southern blood in my veins).

And now for the grand tamale (I know, I know, how can I possibly top a lunch break at the gun range?)… I decided to display my moderate (but in my mind kick ass) abilities and scare the bejesus out of anyone lurking around my mini manse.

Who wouldn’t be terrified upon seeing a target with actual bullet holes hanging on a front door (no one has to know I took aim 12,346 times to achieve the 22 bullet holes actually making contact with the paper). But upon hanging my security guard on the door, no mysterious incidents occurred again…maybe they’re scared of a red neckish, unabashedly trashy girl with a gun.

And when I hit the gun range again, I will be wearing my ultra fabulous, non-communal pink ear and eye protectors courtesy of my First Mate’s hubs. He thought I needed the fancy giddup to match the pink grips he gave me for Christmas. I wish he knew me better…

Wouldn’t you be scared shitless of a girl giggling uncontrollably with pink eye and ear protectors, along with a pink gripped .38 special?

Go ahead, make my day.