You know those times that can just kind of suck you into a funk?

Well, I’ve been there for the past month due to circumstances out of my control (decisions being made for me, being called not-so-friendly names and revolving in a constant run around) but no one is in charge of your happiness but you, right? A swift kick to my own ass and a much needed life break over Thanksgiving helped put the pep back in my step (with help from the knowledge that karma is a mother fucker and the bad juju is not headed my way).

With aid from my brand new phone case that speaks for me without my gigantic yapper even having to open, I’m well on my way to kicking ass again. 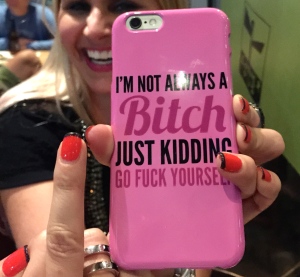 Taking a rather large spill at the beginning of November pretty much paralyzed my work out (not to my dismay) abilities due to an out-of-commission shin and ankle.

Ah the joys of being a klutz.

But a little leg limp didn’t stop the Nashville party wagon from traveling to St. Louis for Dada CBXB’s birthday, where we were able to meet up with Sister Nuts, who drove down from Iowa.

Being that our hotel was directly across the street from Busch Stadium, I became an immediate Cardinals fan upon walking into the gift shop. Naturally I got a leopard and pink Cardinals hat, a silver foiled team jacket and a bedazzled tee. 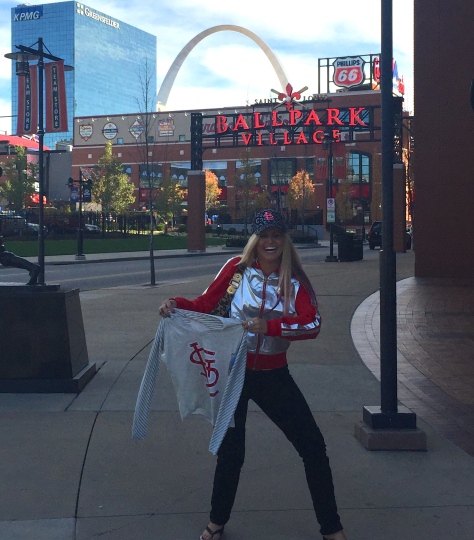 All in. Even though I haven’t been to a Cardinals game since I was eight.

And don’t think we didn’t meet up with the Iowa Hawkeye St. Louis club to watch the football game. Aunt Bert and my cousin G were able to hang with us, although you know the birthday boy was the real center of attention.

Family celebration with a front and center star.

Our traditional touchdown shots were accomplished (we even brought our own lucky shot glasses) as our waiter kept bringing us a ‘bartender’s choice’ after every Hawkeye score against the Indiana Hoosiers. 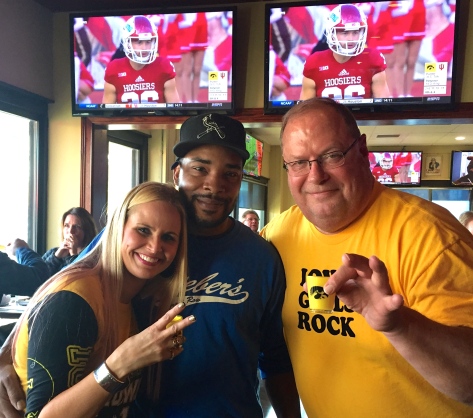 Oh how our waiter Marcus helped make the 9th Hawkeye win of the season a drunken victory!

But because Dada and I are pros, we were still standing when it came time for a real family photo-op. 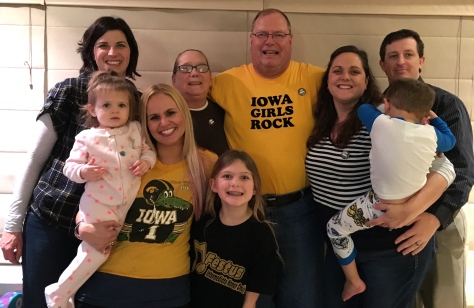 I even held a baby. I’m so maternal.

Not long after our return from St. Louis, I took another tumble down some concrete stairs injuring my other leg. 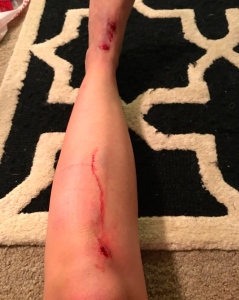 This is what happens when you miss five of six stairs.

I ended up with a fractured foot, putting yet another damper on my ability to work out (at least my right bicep is still in full tact, making sure my Skinny Pirates hit the mark every time!).

No, I typically don’t have cankles.

Yet another injury couldn’t slow me down when it comes to Iowa Hawkeye games.  This gimp celebrated with friends at the Nashville Iowa Club party, watching our team move on to 10-0 against the Minnesota Gophers (I mean, what kind of mascot is that?). 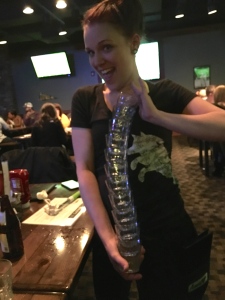 The following week, nine inches of snow blanketed the home field at Kinnick Stadium on game day. But the snow removal crew cleverly cleaned the area and it was prepped for kick off against Purdue. 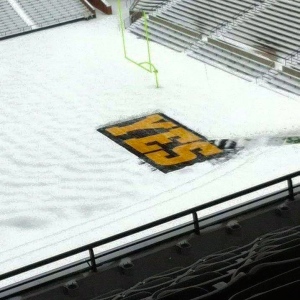 My Iowa men were able to pull off a 40-20 win over Purdue, upping our record to 11-0 for the first time in school history (and our football program has been around since 1847). 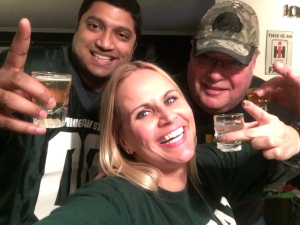 Fifth shot for yet another victory!

In between football shots and falling down stairs, I visited Miss America who recently added twins to her gaggle of kids (seriously, this woman now has five kids six and under).

Miss America and the 11th runner up.

Another adorable set of twins in my life!

Speaking of k-ute twins, check out the faces of my Iowa twins after seeing their first snowfall this year.

Snowfall means it’s time for expert Christmas tree decorating and if anyone is taking over in that domain, it’s Princess B.

Even if her contributions make for a bottom heavy tree.

Prince and Princess B are also trying to master the art of being under the mistletoe this time of year. 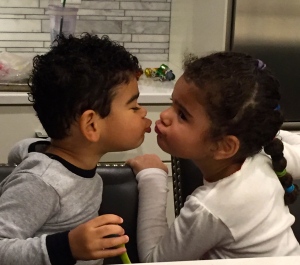 Almost but not quite.

Yet another set of twins in my life, Clark and Cousin Eddie are not really wanting to leave Dada CBXBs’s abode as he has been spoiling them rotten while Ted is still on the mend for his recent bought with pancreatitis.

A comfy Clark and Cousin Eddie.

To know me is to know I love Captain Morgan and my Skinny Pirates more than water. I couldn’t love my fur ball Ted more if I’d birthed him myself (yeah, I said it). My birthday and Christmas are my two favorite days of the year, with Halloween coming in at a close third (because why not celebrate as much as humanly possible?).

BUT I can’t say there’s much more I love right now than my Iowa Hawkeyes.  They took to the field against Nebraska this past weekend and won, making school history as no team has ever gone 12-0 in a single season (and here I was just hoping for a winning season).  Although Dada CBXB and I weren’t together, we were able to celebrate our touchdown shots together through FaceTime. 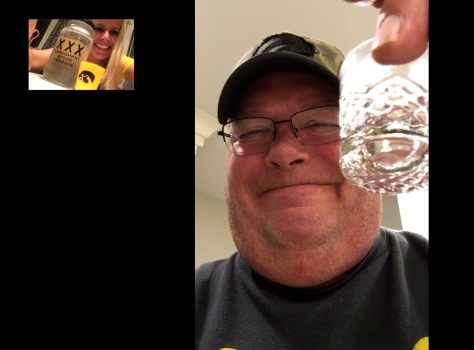 I can’t even begin to tell you the excitement of being one of the two undefeated teams in college football right now. And this weekend, we’re packing up and heading to Lucas Oil Field in Indianapolis where the Iowa Hawkeyes will take on the Michigan State Spartans for the Big Ten Championship title.

Even though we’re the underdog going into this game, when a rapper is on your side, shouldn’t that be the team favored to win?

What could go wrong if Snoop Dogg is a fan of the Hawks?

Bandwagon up for my team, pretty please. We’ll need all of the help we can get in an unforgettable season.

In celebration of my dad’s 60th birthday, we headed to party in our favorite state with family and friends.

Sick and tired of all of my recent travel, Teddy was bound and determined to make my packing difficult, trying to block the removal of clothes. I almost stuffed him into my suitcase.

Birthday boy all dolled up for his trip.

Look kids, the Arch! A drive by of the landmark in St. Louis.

Quick Trip. “The Mother of all gas stations,” according to the birthday boy. And yes, that’s one classy model a top the trash can.

Passing the nine hour drive with birthday presents every half hour (along with the Luke Bryan song “Country Girl” on repeat for two hours as a sing-a-l0ng. Yes, I’m serious. And yes, I wanted to rip the speakers out of the car). 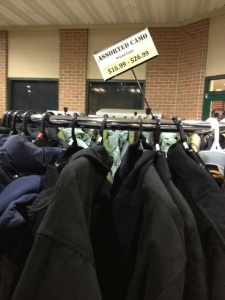 Upon visiting cold Northern states, you don’t have to fret if you forget your coat. They sell them at gas stations. Phew.

An Iowa astronaut greeted us upon our 2am arrival. My dogphew Gunner. 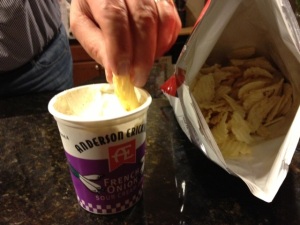 Unable to resist the best chip dip in the world – Anderson Erickson French Onion – even at 3am.

Beer flight for the birthday boy at Parlor City in Cedar Rapids, IA.

One of the best burgers ever – a Jucy Lucy (American cheese cooked inside a 1/2 lb beef patty. I died of sheer happiness). Accompanied by sweet potato fries and a marshmallow dip. HEAVEN.

60 presents for the 60th birthday boy. We cancelled afternoon plans to fit them all in.

Hitting the Iowa City ped mall with the best jazz hander I know, my college bestie.

The Iowa Hawkeye mascot, Herky. My homeboy. More preferably my boyfriend but we can’t get our schedules coordinated.

Game day food – a giant pork tenderloin the size of my head. That I had no trouble stuffing into my face.

Whapsatoolie Time. A family tradition of mixing whatever liquor is available and making a shot for the guest of honor. Birthday boy handled with ease.

Birthday party garbage like this makes for a long nine hours home to Nashville.

And one long week ahead of me…