When a gal pal wants to treat you to a night out for a belated birthday par-tay, why in the world would you say no? Of course we know I said yes, especially when the evening involved a Snoop Dogg concert. I was especially excited to escape from my reality after some particularly bad news came my way last week. A girl’s night out was just what this chick needed.

I over packed and lugged my beauty bag, taking over Funk 49’s kitchen counter to gussy up for a rainy night out in Nashville.

Yes, my bag of beauty tricks includes alcohol. Doesn’t yours?

Known for my booblegging skills at public events where liquor is priced like it’s solid gold, the glass below may or may not be Pepsi.

The night was so full of fun that I forgot what a shit show my life has been for the past 24 months.

After the concert, I didn’t want the night to end so I borrowed my Uber driver’s coffee on the way back to Funk 49’s house for a little perk me up.

Don’t worry. We gave him five stars – and I gave him back his coffee.

We kicked off our rainboots and did what ever girl party does after an evening out – ordered two pizzas for three ladies. 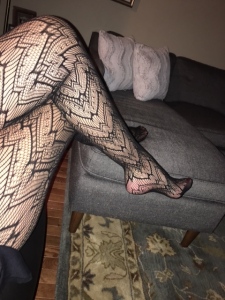 Upon stuffing my pie hole with at least 1.5 of the pizzas, I tried to coax Funk 49’s dog, Buddy, to lay with me in his bed…I don’t know why he seemed so annoyed.

My version of doggy style.

So I settled for a little downtime the following day with my own puppy Presh.

Prescription sunglasses are the only way to go when rehydrating on a Saturday morning.

While I was hunkered down in my Princess and the Pea bed, the Iowa twins were stuck inside for a third day in a row due to rain storms. So what did my genius sis do? She turned the garage into a bike bonanza for four-year-olds.

The Nashville Predators are in the NHL playoffs and my crew settled in for the third game of the series against the St. Louis Blues. Rocky, Princess Elsa Pants and Ted proved three times a charm, as the Preds skated their way to a 3-1 victory.

I nestled into a Sunday full of job searching, #girlbossing, therapy homework, with a side of Glamour.

No weekend would be complete without an evening full of leopard couch time with Ted – who now has his own personal shadow named Elsa Pants.

I found out that my first furry friend in Nashville crossed over to the Rainbow Bridge last night. Caesar was my constant companion when I worked as a personal assistant for a family when I first moved to Music City. He was my only “co-worker” and kept me company so many lonely nights in a new city. Love and miss you little guy. 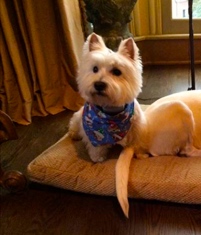 Trying to keep the wheels from falling off my fragile state of mind, I hit the alarm early for a 7am yoga class today. But about .0005 seconds into the commute, I was t-boned in my parking lot, causing my chariot to come to an immediate halt for the time being.

No zen in sight on this Monday.

I decided it best to switch my morning coffee for something a tad stronger while on the phone with my insurance company.

So while I seem to be running into a tad of misfortunes lately, I can’t help but wonder…