WARNING:  If you hate people who dress their pets up, stop reading. Right. Now.

With the establishment of my cray cray cat lady persona, it’s safe to say the apple doesn’t fall far from the tree in my family. My sister is just as loco over her pooch, Gunner as I am over my fur ball of a baby.

And being the crazies that we are, of course our four legged family members end up in costumes for Halloween. Sometimes even matching costumes (I mean, they are cousins after all).

There are, however, slight differences in trying put an outfit on a sweet dog like Gunner vs. a bitchy cat like Teddy (the first being that I’m the only lunatic I know who puts her freaking cat in an costume, but I digress).

Patiently waiting for the limelight.

Cats think you’re an f’ing idiot for even trying to embarrass them in such horror.

Ted conducted a complete investigation at first sight of the unknown object in the living room.

Dogs like Gunner adore their altered look so much, they’ll dine in it…

Cats will act like the felted material is the heaviest thing they’ve ever encountered on their back and sit paralyzed (mostly to spite you).

Teddy…wishing he could put his stinger to use.

Dogs like Gunner stand and proudly pose for pictures… 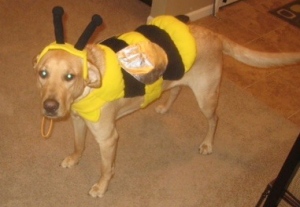 Cats, especially Teddy, would be giving you the middle finger, if possible.

Dogs like Gunner enjoy their new found accessories so much, they often forget to de-costume before bed. 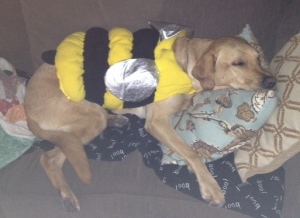 Cats can’t wait to claw your eyes out once they get this God awful attire off right this second.

After our dramatically different photo shoots, it’s safe to say Ted’s outfit will be going to a Halloween graveyard (which is OK because I got it for $5 – sigh of relief) and Gunner will be wearing his until Christmas.  Maybe costumes are best left to the human race…but what fun would that be for my sister and me?

Our parents are so proud.

This is a face and big, loud laugh of a human who fights for her mental health every goddamn fucking day. Who tries really hard to show up for herself. Takes her meds. Supplements. Vitamins. Exercises. Rests. Laughs. And still feels like she’s at the bottom of the Grand Canyon, trying to climb out to function daily.