One of the joys of living in a city that isn’t equipped to handle any type of winter weather, is it’s kinda fun when it comes. Freezing rain on Friday meant that I was able to slide out of work and into my bed for a day of conference calls and cat naps (the cats, not me of course).

When you’re given the option to work from home… 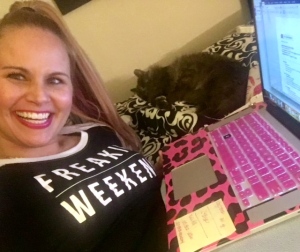 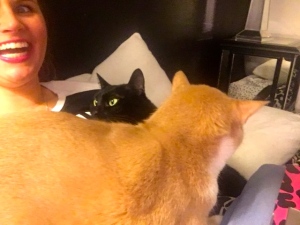 No one was excited about it at all.

My mom checked in from Iowa to make sure I was all set with necessities because it’s a fucking freak out frenzy when there is even mention of the “s” word – SNOW. Nashville citizens (and anyone else who didn’t grow up above the Mason Dixon Line) all but lose their goddamned minds.

While I was hunkered down with my pussies Saturday, my Iowa twins were getting hyped up to par-tay. Why you ask? Because they are turning five – FIVE – FUCKING FIVE YEARS OLD – on Wednesday. I mean holy fucking shit how did this happen so fast?

Due to the fact that Princess B eats salsa like its soup, the day was a fiesta complete with the best cakes on the planet.

My artsy sis even crafted a pinata for the occasion.

Naturally, there were outfit choices to be made and Princess B did not disappoint.

Just a little gussy up.

Nor did she get any salsa on the sequins.

I finally mustered up the energy to walk over to Rasta’s pad on Saturday night, forcing myself out into the blustery cold I’m not used to anymore. Speaking of force, Rasta isn’t a football fan of any sort and I made her watch the Titans game in her own house. 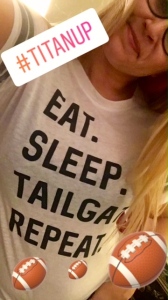 While I drank her wine. 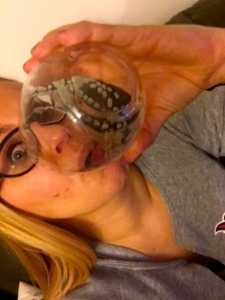 My Titans were playing actual football titans, the New England Patriots and so I was hoping for at least a touchdown. And we scored one first! Then, just as quickly as that happened, my dudes ended up getting an ass beating. Rasta kept up with the team spirit though, assisting me through the horrendous game. 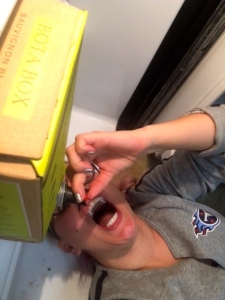 Yeah, it was that bad.

She wins the sportsmanship award for sure. 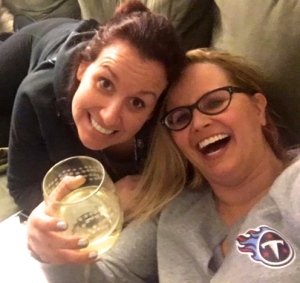 I was up at what felt like the ass crack of dawn on Sunday to watch a segment on CBS Sunday Morning. It was regarding the Time’s Up movement and Oprah interviewed several prominent women who helped initiate the campaign. Being that I take great interest in this due to Rapegate and the #MeToo movement, I expected support from my pussies.

Only one showed the fuck up.

The others were busy having a menage à trois in the unmade bed.

Thanks for the support, assholes.

While watching other NFL playoff games, I started to take down the few Christmas decorations I put up this year and toyed with the idea of Valentine’s Day. But promptly stopped after dressing my Glamingo.

I also somehow came across a hideous Pucci hat that a lady who thought she was famous and was my boss at the time gave me as a leftover present (she would regift her unwanted Christmas presents to me for my birthday in March). You want it? It’s yours. 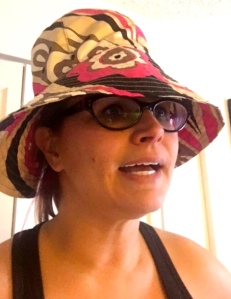 Her exact positioning and expression in every photo.

After throwing one helluva classy fiesta, my sister pulled through in our white trash ways when storing leftovers.

After getting her text, I was craving Mexican and justlikethat First Mate sent a text wanting to meet up for wine at our fave joint. Talk about fate. 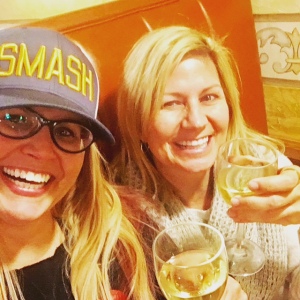 We come for the handsome pours of wine, not the margaritas.

The Minnesota Vikings game (which was one of the best last second endings ever) was on at the restaurant. The fans chant skol and my sister and I were confused as to what it meant. We had an Iowa-Tennessee-Georgia family tutorial via text from my cousin Tballs – a huge Vikings fan.

My guess of “yeehaw” was way off.

After heading home with a belly full of wine, salsa and chips, I settled in for a night cap.

Here’s hoping your week is full of fiesta-ish fun.