Miss me? Because I missed you as I greeted 2015 with about ten extra holiday pounds and 40,401 less brain cells. 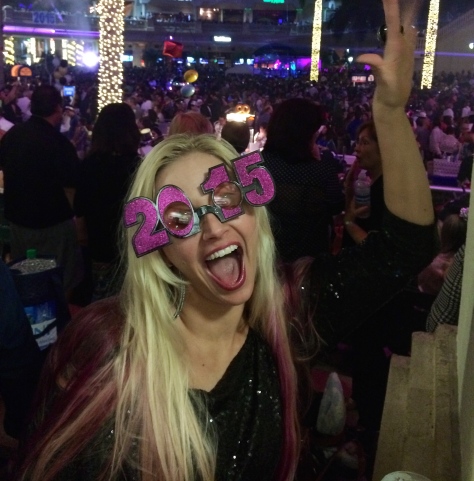 While on a blogging break, I hung with my two favorite pussies more than I care to admit in Christmas pajamas. 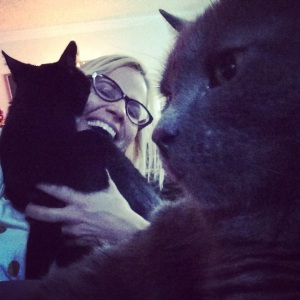 I played reindeer games in hopes that Saint Nicholas would soon make an appearance. 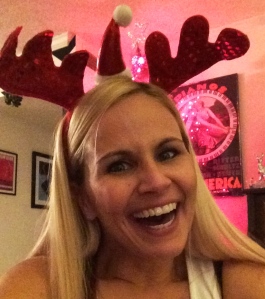 All dolled up with no Santa in sight.

Ted nestled down in his Juicy Couture Pussy Palace while visions of life without New Cat danced around in his furry head. 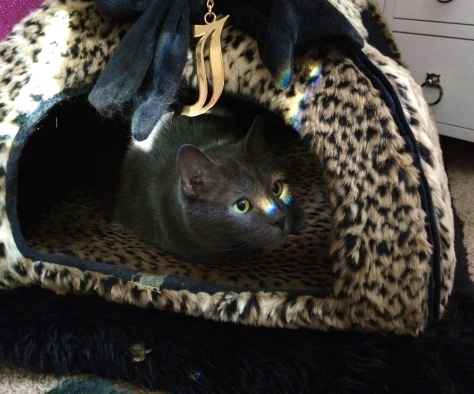 Seriously contemplating how to get rid of NC. I raise sweet cats.

A key for Santa was accompanied by my favorite treat. 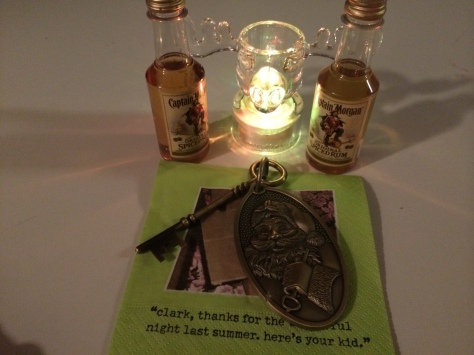 Who wants milk when you can have Captain? 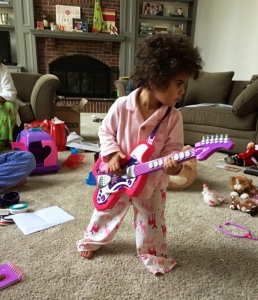 Rock star in the making.

While Prince B got his very own puppy from me. 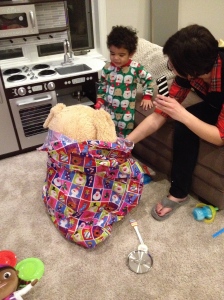 I almost wrapped up New Cat but settled on this instead.

And Princess B was so upset that she didn’t receive a stuffed dog too, she taught my mom a less by punching her in the face. 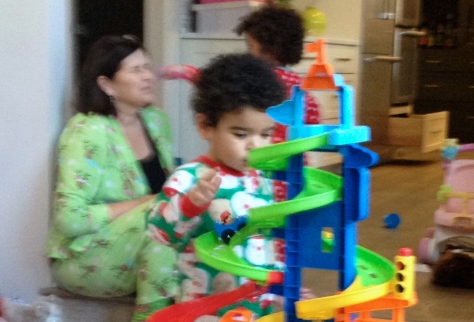 And so she stole Prince B’s gift. 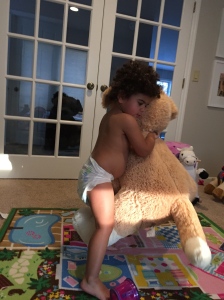 While I stole all of the chips and AE French Onion dip in the house. 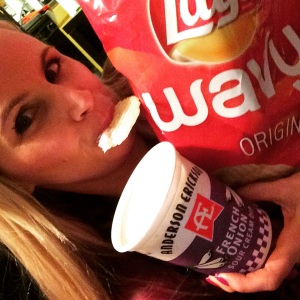 ‘Tis the season of overeating….

Which came in handy as I was leaving for Miami the following day. 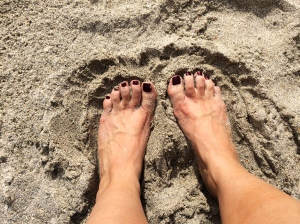 Toes in the sand with my chip and dip gut.

But I visited the local Jewish Community Center where I tried to work off my Christmas caloric intake but couldn’t figure out how to use the damn equipment. 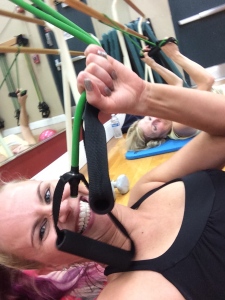 Trying to shed ten pounds in one morning didn’t really work out in my favor but that was OK as I was too busy kissing 2014 goodbye to care. 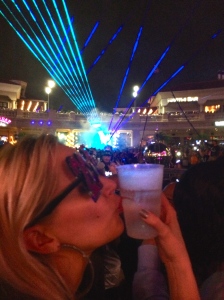 I love you Captain.

I also got to hang with some real hipsters who obviously got all dolled up for the big night. 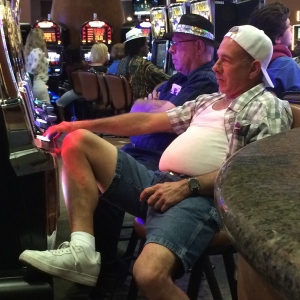 He had chips and dip over the holiday too.

And as it came down to the final seconds of 2014, I celebrated in my normal subtle way. 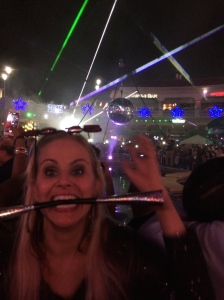 There was much to anticipate in the early days of 2015 – like one more Iowa Hawkeye football game. And while I wasn’t with my family to celebrate in our traditional game day ways, we still ‘tailgated’ together. 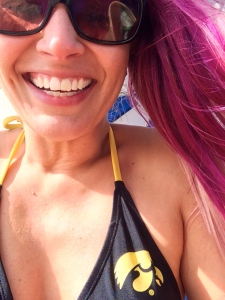 Representing the Hawks on the beach. 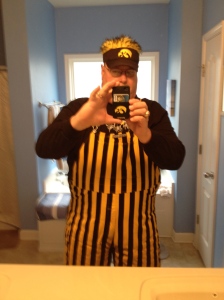 Overalls on in Tennessee. 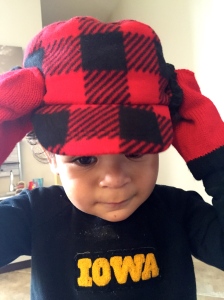 Preparations for the game being made in Iowa by Prince B. 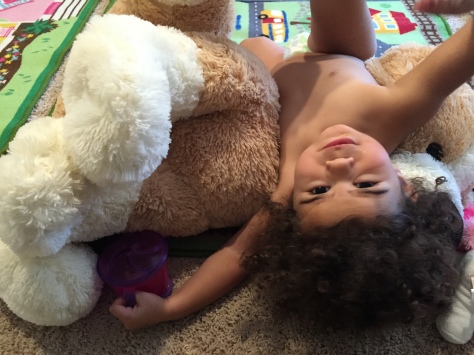 While Princess B could give two shits about the upcoming game, as she was still busy with her brother’s puppy.

When the ominous clouds rolled in over the beach, I shoulda known what was going to happen as the Hawks have had a piss poor season. Even though we were playing an equally dismal team, the University of Tennessee Volunteers, I just knew it would be a good game, forgetting the fact that I attended one of the top party schools in the nation (according to a 2013 report). So I suppose fun in the sun got the better of my team. 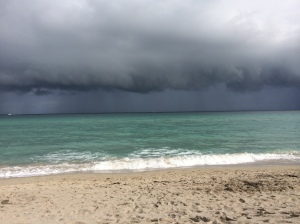 Lightning did not strike for my Hawkeyes.

After a 21-0 Vols lead in the first quarter I was suddenly thrilled that I didn’t make any bets with the Tennessee fans around me. Finally in the third quarter of the game Iowa scored but still managed to make the Tennessee Vols look like a Superbowl team. 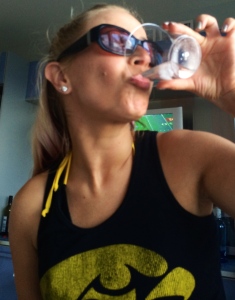 A much needed celebration touchdown shot.

The Vols had not won a post season game since 2008 and I was less than thrilled that my Hawkeyes were able to grant them a big W with a final score of 45-28. And so I did what any fan would do after losing a hideously named Taxslayer Bowl… 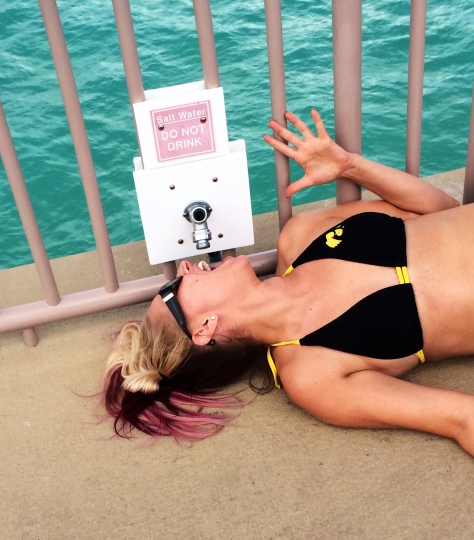 Drowning in my salt water sorrows.

Upon my arrival back to Nashville, I was greeted with fuck you flowers from my buddy and Vols fan, Camo. 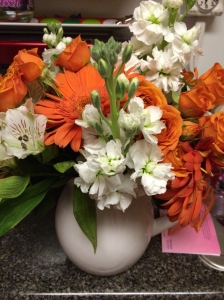 A masked insult in a lovely bouquet. 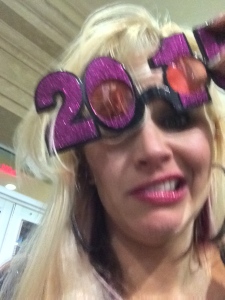 Until I ran into my best friend at Dalts, which made everything right in the world again. 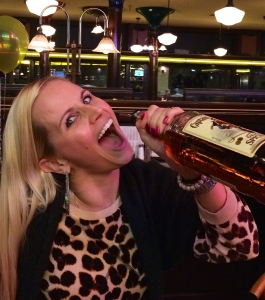 Skinny Pirates to the rescue!