January is proving to be the most challenging time of the year for me. While I’m thrilled for a new year, something negative creeps into my bones whether I like it or not. My stutter is back. My bouncy leg comes out of nowhere. A sense of profound grief follows me around like Peanuts’ Pig-Pen’s dust cloud. It’s almost my Rapegativersary and my body realizes this. BUT all that being said, I have peeps who know how to keep me on the up and up, and so instead of treading water, I’m on a floatie.

My besite stopped by the Mini Manse Friday and we sipped wine (surprise!) and watched the Melissa McCarthy movie “Life of the Party.” Beyond hysterical. 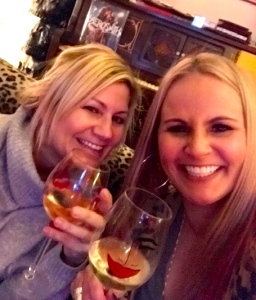 Saturday, two of my four pussies had vet appointments for annual check-ups. When I was scheduling, they asked which two and I said, “whichever two I can wrangle into carriers.” You know, Ted always just got swaddled in a blanket and sat on my lap during car rides so this carrier thing is new to me. And my pussies are not stupid (well, except for Ruby Sue – aka Thundercunt – who was the first victim in a cage).

Who wants a shot?

Fabio was a wee bit too big for the skull and crossbones carrier.

But not for the pink one. It was a full on wrestling match trying to shove his muscled ass into the cage but somehow after about a 10 minute struggle, I got the fucking door latched. 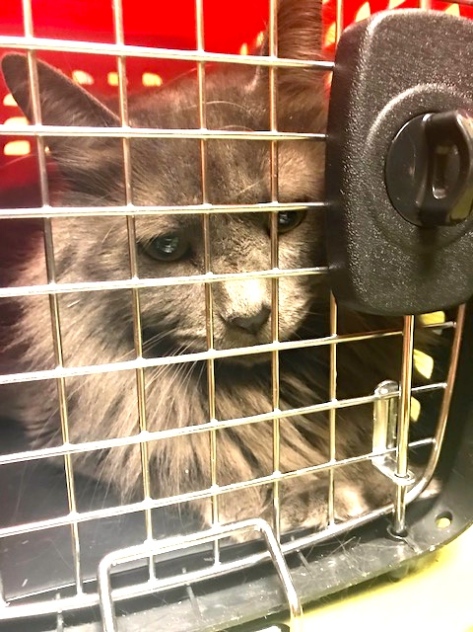 Ruby Sue on the other hand, was in some serious shock at the thought of getting on the scale. Or being at the vet. Or the car ride. Or all three.

While we waited for the vet, I almost laughed the building down when I saw this comparison on social media. 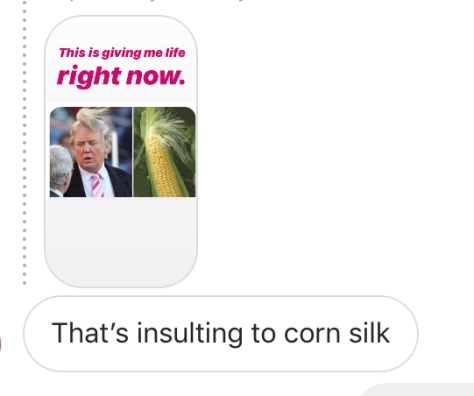 I don’t care which way you lean, it’s fucking funny. Upon wondering what kind of comedy show my pussies were putting on in the waiting room, we got a clean bill of health for both Fabs and Thundie. Although Fabio gained 2.5 lbs last year, so he’s officially “big-boned”. Just more for this mama to love on.

While my pussies were braving the vet, my Iowa twins were eating ice cream in sub degree temperatures. Because they’re bad ass like that. Pretty unprecedented weather is coming through the state with temps supposing to feel like -41 later this week. Makes me love the Nashville 50 degree winter days all the more. 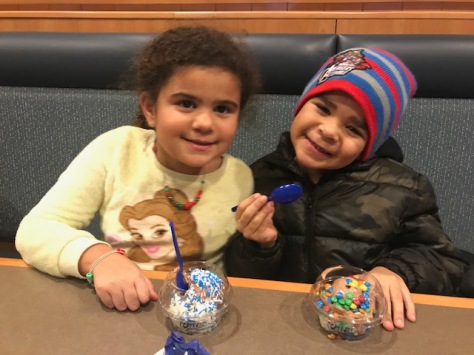 First Mate had a girls gathering on Saturday evening and while I almost didn’t go, I was so glad I did. 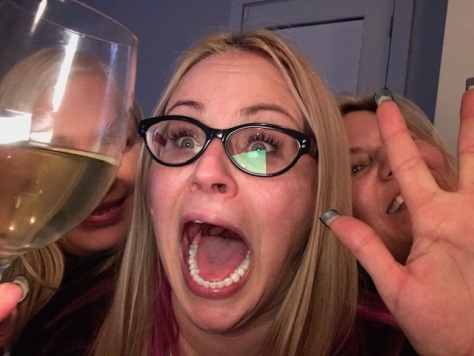 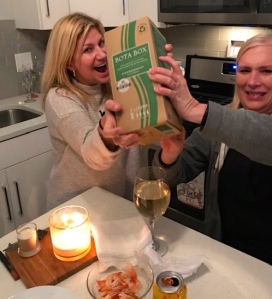 First Mate and Rach had to team up to pour my glass of wine.

My eye happened to catch what I thought was a tea pot on FM’s counter and thought aloud, “why the fuck do you have a penis pot on your kitchen counter?” Turns out, it’s actually a nettie pot used for sinuses and allergies and we got a full-on infomercial on how to use said pot. 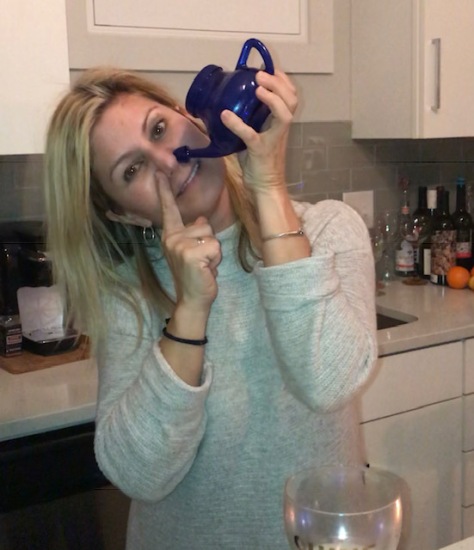 Best kind of therapy for me (friends, not the penis pot).

Perfect remedy for me.

First Mate tucked Rach and I into her couch and she had to wake us up from our peaceful slumber the following afternoon.

What happened? Where am I? Who am I? 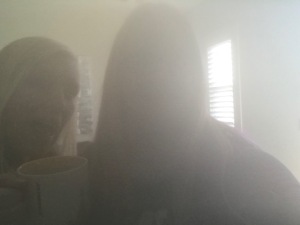 What I saw when I woke up.

Good thing is, we hydrated with water all night AND ate pizza (Rach had no memory of) so after a little coffee, we were good to go after a 16 hour girl’s night in marathon.

There’s this “game” on Facebook where you can have your next five year’s predicted through photos. This is what a normal one looks like… 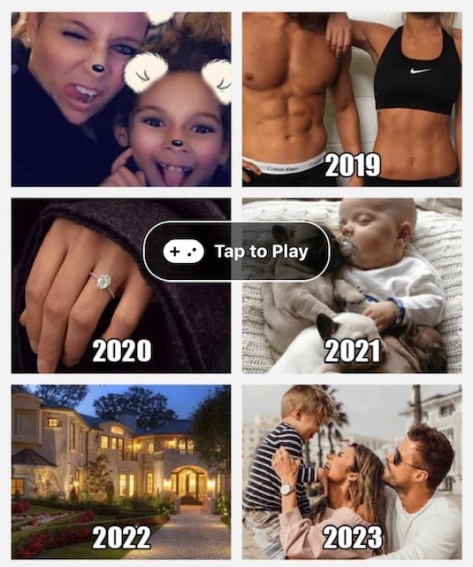 It takes your profile pic and then gives you standard photos for the next five years of your life. 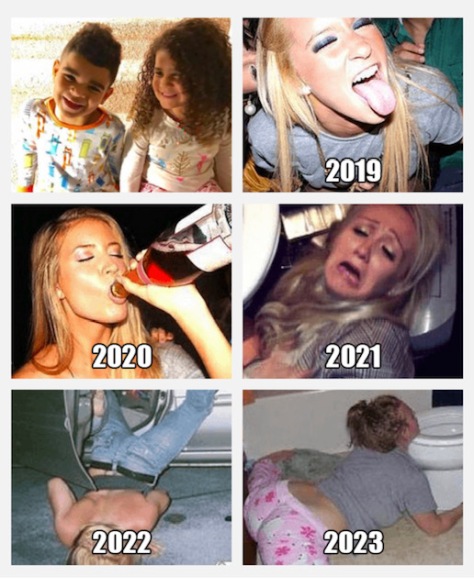 The actual fuck? I’m not sure why I was surprised although my profile pic is of the twins.

Side note: if someone could put a pillow under my chin in 2023, I would greatly appreciate not getting a stiff neck from sleeping on the toilet face first. Thanks.

So while we all try to roll with punches that hit us, it’s always fabulous to have support of any kind. Thank you for yours.

You know when you’re a lady who single-handedly runs a fucking funny farm full of animals inside of her own mini manse that inevitably, someone is going to get sick…and then they all get sick. Because when everyone eats, drinks and shits in the same places it’s germ swapping mania. 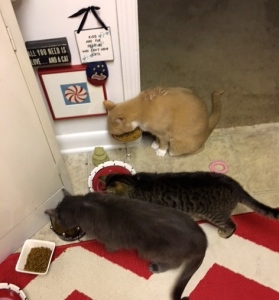 So we spent the better half of our weekend at the vet. Why you ask? Because everyone in the goddamned house had worms. FUCKING WORMS. All from our little chug who brought in fleas, which I thought I’d gotten rid of after a dip in the tub and a bomb of the mini manse but apparently, one of the felines got one in their belly and fleas turn in to worms.

You know what’s fun when you have four cats and a dog? Prepping to take stool samples for the vet to examine, Ted’s meds for refills and new pussy paperwork on the three February family additions (yes, I’m my veterinarian’s dream come true). 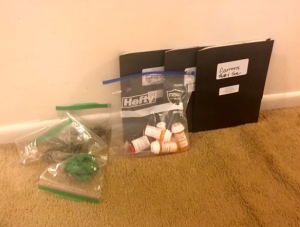 Just another day in my fabulous life.

We loaded up (after a 43 minute mad dash for the baby, Elsa Pants, under beds, on the porch, in a kitchen cabinet – although I can’t blame her because she was getting to ride in a box) and were on our way. The two older cats got to stay back and receive topical treatment when I got home – which didn’t go over well with the three in my petmobile.

When we finally got to the vet, I realized that my Louis Vuitton (my sixth baby), literally had shit in it because that’s where this blonde thought it was a good place to house the Ziplocs of feces when rounding the fur balls up. 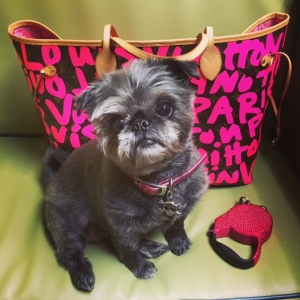 Sweet Elsa Pants had no choice but to be patient in her box because she might as well be a greased pig running down a high school hallway during a Senior prank when out and about.

We have a runner.

Ted and Elsa took their topical worm treatments like pros. Precious on the other hand, ate her way through 18 pill pockets and STILL didn’t get the pill down. 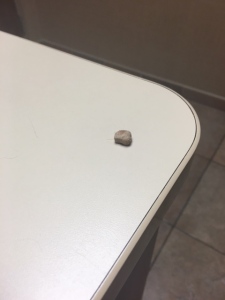 Do your dogs do this?

After five attempts with a pill popper, the vet techs (yes, plural) were successful but someone wasn’t thrilled.

The winning weekend news though was that Teddy gained a pound since February (which is fab, since he lost half his body weight last year due to illness).

Bad news is Precious also gained a pound since February.

The worst news is that yours truly has gained 15 pounds in the same time frame. 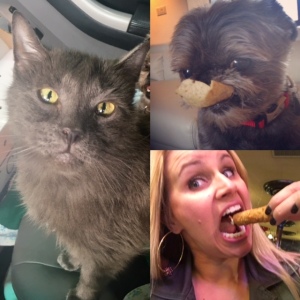 Better news is that my pharmacist still knows how bananas I am over my pussies since I get to renew pet prescriptions at Walgreens. 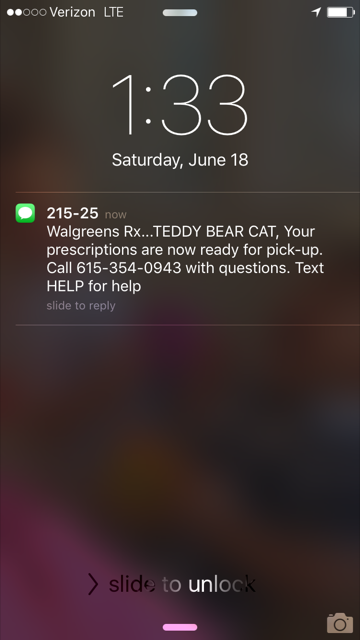 While I was very busy running around after fur balls and excavating worms, my Iowa twins were all gussied up at their first go ’round as wedding participants. 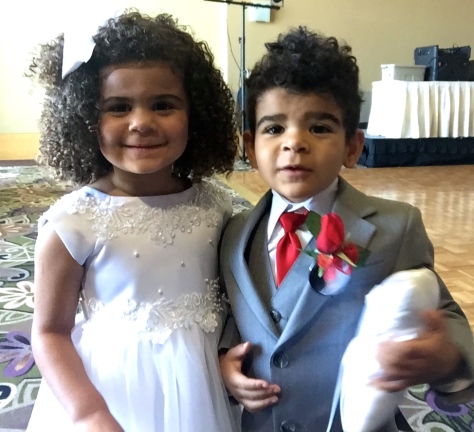 You know they were highly rewarded for their fabulous efforts.. 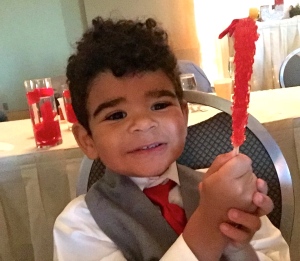 Turns out, someone takes a little too much after Auntie CBXB in the party department.

Sleeping beauty had one too many slices of cake.

Sunday was spent with Dada CBXB doing what we do best in celebration of Father’s Day. 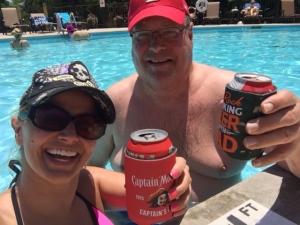 Here’s hoping your week is off to a worm free, winning start.

Kitty karma is once again needed for the always dramatic king of my life, Teddy Bear. He’s been thwarting off some kinda sickness but blood work and x-rays have come back clean so today, he’ll be having exploratory surgery.  Having clear tests is positive, but only somewhat as Ted has lost nearly half of his body weight and he has no appetite. 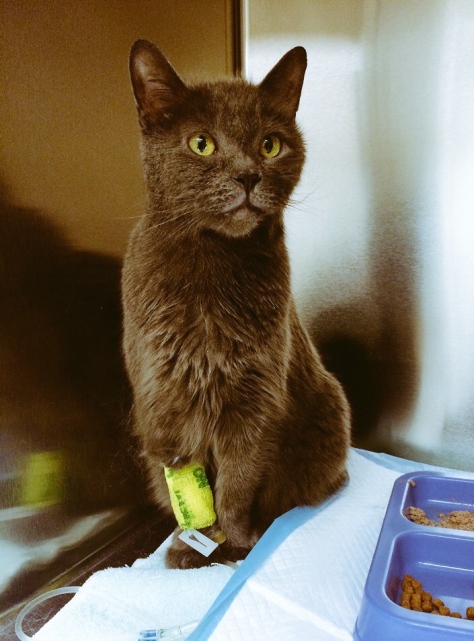 So hopefully today we’ll find out how to get Ted his groove back.