Oh the sentences muttered around yours truly.

Living in Nashville, chances to see fabulous live music always present themselves. This past Friday Willie Nelson, along with Alison Krauss and Union Station played at The Woods at Fontanel.

The Woods concert prep on a gorgeous Tennessee day.

It’s Nashville’s only amphitheater and a pretty kick ass venue.

Arriving just as the sun set, I was immediately put in my place among the riff raff at the venue. While I wasn’t important enough to be a Big Deal, I was above being a Groupie and found myself among the Blue Collar folks.

Blue Collar all the way.

While settling in to hear Willie croon my fave song “Crazy,” (did you know Mr. Nelson wrote Patsy Cline’s biggest hit?) I was enjoying the crisp spring weather along with a Skinny Pirate. Typically at live shows, I’m on my way to losing my shit the second the first note creeps out of the speakers but at the start of Willie, I was uncharacteristically calm.

Calm that is, until my eyes spotted a t-shirt that I needed and somehow sweet talked its male owner out of (he went to his car with his girlfriend, mind you, to get another shirt).

How would my life have been complete without this top?

Ask and you shall receive.

One of my buddies asked if I was coming up on stage as they loaded out equipment. 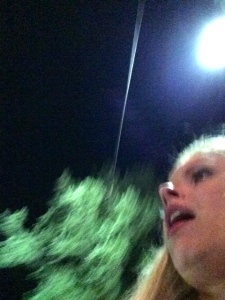 If you’re behind the barricade, you’re a Big Deal.

…but was kindly directed to the stage.

I belong here. On stage. Duh. 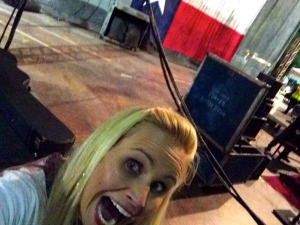 Being that I work in the music business, it’s never cool to show any emotion while experiencing anything out of the norm. So there I was on stage in a stolen Shotgun Willie shirt, a plastic concert bag of swag and my mouth hanging wide open.

Who wants to claim this fool?

Luckily for me, my buddies decided to throw me a bone but not before one of them uttered…

“Who let the super fan on stage?” 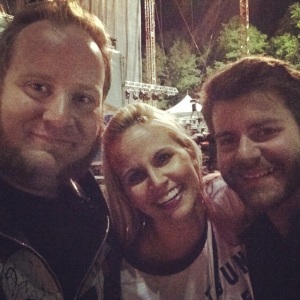 You can always count on me to make you look cool.

Oh the fun that filled my Nashville weekend!

Back in January, I filmed a sizzle reel for a potential reality show and I have been waiting for the final product.

Sizzlin’ it. Just a little bit.

While sitting at my desk trying to eek out a little more work just before the clock hit five on Friday, Producer Paul texted me and said that I’d get to lay eyes on the final reel later that evening. Naturally I pestered him to the point where he wished he’d never opened his mouth and learned that I had to wait another two hours.

So I went to kill time with a few Skinny Pirates at Dalts before the Nashville premiere of my sizzle.

After getting over the fact that hearing my own voice makes my ears want to bleed profusely and wishing I’d eaten 800 less sugar cookies over the course of the holidays (as we filmed in early January), I nestled into my bar stool and let ‘er rip. 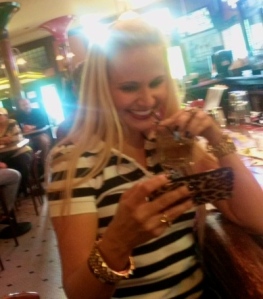 Not so bad the first time. 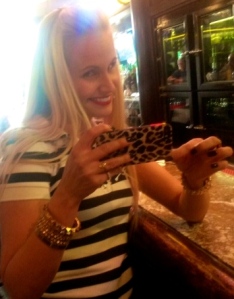 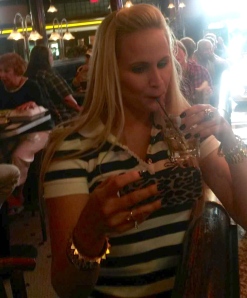 Third round proved a monster had been born.

Rudely interrupting my sizzle observations, a chance to see Willie Nelson presented itself and how could I say no?

I also couldn’t refrain from stealing a Shotgun Willie shirt off of the back of a gentleman in the crowd. OK, I didn’t steal it.  I simply admired this dude’s shirt out loud and he offered it up after some gentle prodding by yours truly. 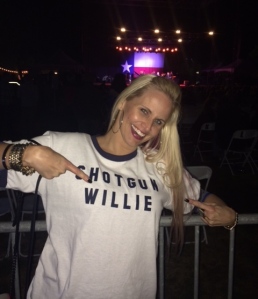 Mamas don’t let your babies grow up to be robbers…

I also got to hang with my work buddies who made my Willie experience all the more fabulous.

Finding myself out way past curfew, I fully expected a tongue lashing from Teddy upon my return to our mini manse. But he could barely even muster an eyelid opening and I found myself off the hook. Holla! 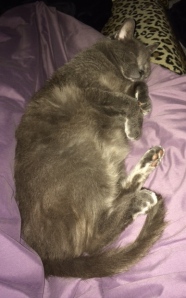 Too tired to care.

I found myself dazed and confused staring at my half-assed wallpaper fail and found the motivation somewhere in my dehydrated state to finish the damn job – even the wonkiness above the doorway.

All around unfinished fail.

After three hours, four cocktails and one large headache the stick-on wallpaper mission was accomplished! 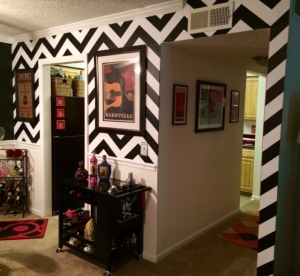 Not at all amused or sharing my joy in any way shape or form was none other than Mr. Ted E. Bear who slept off his food coma (I accidentally fed him breakfast twice) while I practically stood on my head lining fucking stripes of sticky paper together.

Trying so hard to not give a care.

Keeping in the spirit of putting pep in household steps, I helped G (you know, the friend who almost brawled an 80-year-old man for me) gussy up her new bedroom by throwing any and everything in her cart at Target (much to her hubby’s dismay, I’m sure). On a side note, did you know that Southerners call shopping carts buggies? Yes, like the horse and buggy type. Just an FYI for you. 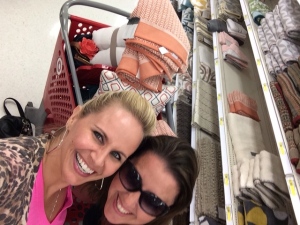 Coming home I found these my two ‘we-don’t-like-each-other-when-you’re-around-but-when-you’re-not-looking-we’re-in-love’ cats sitting in tandem on the porch.

All weekend I was sweating how to break the news to Tedstar that he didn’t make the sizzle reel, even though he made damn sure he was highly involved during the weekend shoot. 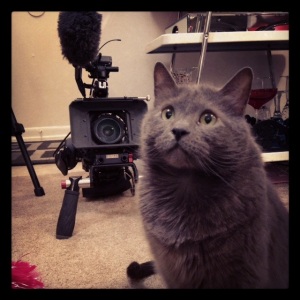 Patiently waiting for his close-up.

As we nestled into bed and I turned the sizzle on for the fourth time this weekend, Ted couldn’t do much of anything but silently seethe when he found himself missing from the entire footage.

If looks could kill.